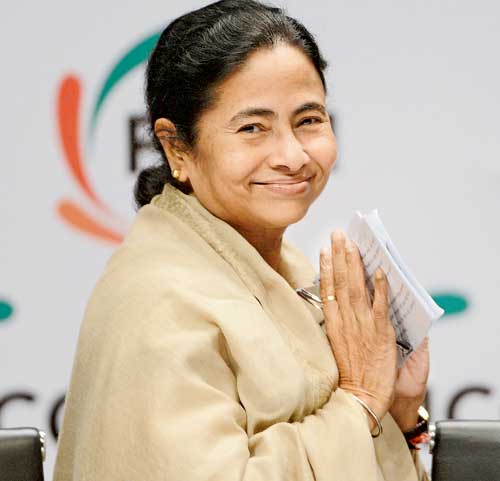 Mamata Banerjee (born 5 January 1955) is an Indian politician who has been Chief Minister of West Bengal since 2011. She is the first woman to hold the office. Banerjee founded the party All India Trinamool Congress (AITMC or TMC) in 1997 and became its chairperson, after separating from the Indian National Congress.

In 2011 Banerjee pulled off a landslide victory for the TMC Congress alliance in West Bengal by defeating the 34-year old Communist Party of India (Marxist)-led Left Front government, until then the world's longest-serving democratically-elected communist government.

Banerjee previously served as the Minister of Railways twice and is also the first woman Railway Minister of India, Minister of Coal, and Minister of State for Human Resource Development, Department of Youth Affairs and Sports and Women and Child Development in the cabinet of the Indian government.

... to form government. Among them, Tamil Nadu's J Jayalalithaa is set to add 27 and West Bengal's Mamata Banerjee 32 seats in massive victories in their states. Will they support a BJP government?  ...

... Sabha seats. Mamata Banerjee-led Trinamool Congress is projected to win 32 of 42 Lok Sabha seats in West Bengal. The Left parties are projected to get only 9 seats, 6 less than the last time and Congress ...

... to 24 more Lok Sabha seats Trinamool intends to contest, will ensure a sizeable number of first timers in its candidate list. Mamata is also keen on accommodating those candidates who lost the 2009 ...

... Hazare backed West Bengal Chief Minister and Trinamool Congress chief Mamata Banerjee for the prime minister's post, as the latter had agreed to the Gandhian's 17-point agenda.  Listing out his agenda ...

... 40 seats. West Bengal Chief Minister and Trinamool Congress chief Mamata Banerjee has already floated the idea of a Federal Front to counter the Third Front led by her arch rivals the communist parties. ...

... Biman Bose said today. Bose said the names of all 42 candidates would be announced shortly. Reacting to Chief Minister Mamata Banerjee's remark that opposition members who boycotted the Assembly today ...

...  Denying that horse-trading took place, Chief Minister Mamata Banerjee said those from the Congress and the CPI(M) who voted for the Trinamool candidates, did so on ideological grounds. "Those ...

... only politician he admires. He prefers any setup with a strong leader and unified chain of command and has a positive opinion of Mayawati, Jayalalithaa and Mamata Banerjee as well.   Jairam Ramesh's ...

... who secured nearly 34 per cent votes.   Mamata best choice among non-Cong, non-BJP leaders The National Democratic Alliance (NDA) is also the most popular choice among the young voters as 34 per ...

... The opinion poll gave Mamata Banerjee's party 23 seats against its current tally of 19, which came as part of its alliance with Congress in 2009.   The Left Front might get 15 seats, as the Congress's ...

... set to gain in the general election, the poll found. J. Jayalalithaa, Mamata Banerjee and Kumari Mayawati, all known for their authoritarian style of governance, could cobble together an unprecedented ...

... winning about 6,250 seats uncontested and alleged that their representatives were not allowed to file nomination. On the other hand, Chief Minister Mamata Banerjee has claimed that the elections were ...