It will need the support of 43 more MPs to get to 272, the halfway mark in the 545-member Lok Sabha, for which elections will be held next month.
The ruling UPA, led by the Congress, is likely to get 126 seats only, the survey shows. The Left and other allied parties like the Samajwadi Party and Nitish Kumar's JD(U), which have recently announced a non-Congress, non-BJP alternate front, are set to get 55.

It is from the "Others" column of 78 seats that the BJP will have to win more friends to make up the numbers it needs to form government. Among them, Tamil Nadu's J Jayalalithaa is set to add 27 and West Bengal's Mamata Banerjee 32 seats in massive victories in their states. Will they support a BJP government? 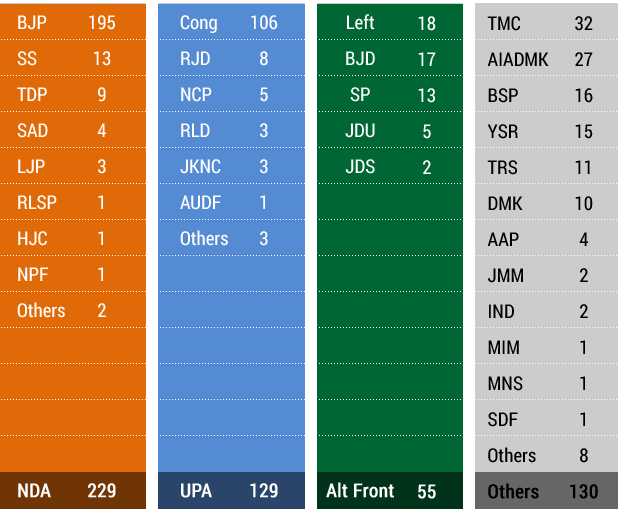 Mamata Banerjee has said an emphatic no Narendra Modi as PM. Jayalalithaa has not and it will be to this "good friend" that the Mr Modi is likely to look first.

Smaller parties like the JMM, Raj Thackeray's MNS, the Sikkim Democratic Front, Independents and others, who would not be averse to supporting a Modi government can add another 14.

The BJP will still be a couple of seats short and could well reach out to the Telangana Rashtra Samithi or TRS expected to be the big winner in what will be the new Telangana state, with 11 seats.

The TRS is as yet non-aligned having spurned the Congress' offer for a merger and showing little enthusiasm so far to be a pre-election ally.