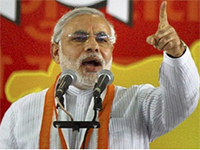 Kolkata:  Narendra Modi, BJP's prime ministerial candidate for the 2014 Lok Sabha elections, addressed his first ever election rally in West Bengal. Narendra Modi began his address at the rally in Bengali.Here are the highlights of his speech: