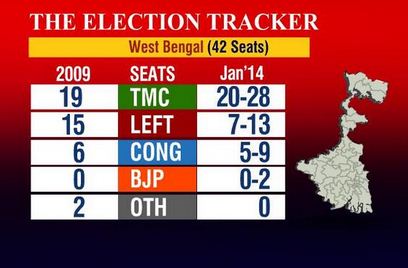 Interestingly, the Congress voters are most open to an alliance with the TMC. Left voters are most open to a tie-up with Congress while BJP voters are most open to an alliance with TMC, and the TMC voters are open to an alliance with both Congress and BJP.
The satisfaction with the TMC is also 55 per cent and is actually growing. Six out of 10 respondents are satisfied with the administration of Mamata Banerjee. Interestingly, the anti-TMC government feelings have also seem to have decreased in the state in the last 6 months.
Over 39 per cent voters are dissatisfied with the UPA government at the Centre, 38 per cent voters say they are not happy with the performance of Prime Minister Manmohan Singh.
West Bengal has also shifted from being pro-UPA six months ago to anti-UPA now.
Modi leads PM race:
Like most other states, even in West Bengal, Narendra Modi leads the PM race. He has got 18 per cent voters backing for the PM post as against 11 per cent for the Mamata Banerjee. Rahul Gandhi has got 9 per cent support.
AAP impact in West Bengal:
One-third of West Bengal voters have heard of the AAP. But less than 20 per cent of them want the AAP to contest in the Lok Sabha elections from their seat and only 10 per cent say, they will vote for the AAP.
The sample size for West Bengal is 1264. 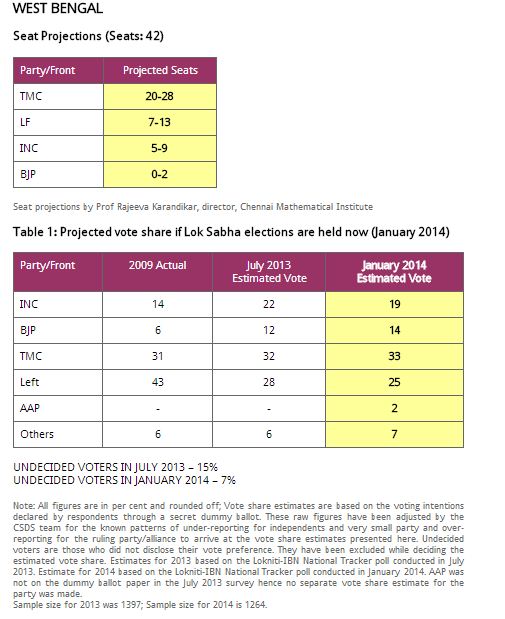