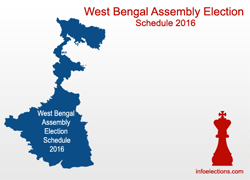 Assembly elections in West Bengal, where TMC is set for a battle against Left Front, are being held in 6 phases in Apr - May 2016.

The Election Commission has declared the dates along with the poll schedule of the four other states headed for Assembly polls this summer — West Bengal, Kerala, Tamil Nadu, Pondicherry and Assam. Read More here .

Voting Has started for 25 Constituencies and 2 Districts of Cooch Behar and East Midnapore  in Final Phase elections today at 7:00 AM.