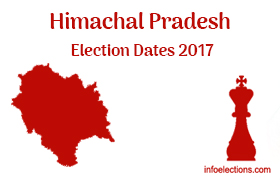 The Election Commission of India on Thursday said that elections will be held on November 9 and counting will be done on December 18.