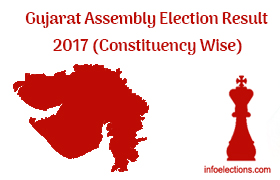 Gujarat assembly election latest opinion poll 2017 has been released India Today - Axis My India on 24th October and shows Big win for BJP would get 110-125 seats, INC will get 57-65 seats. If INC allies with Patiday Agitation leader Hardik patel then it might get 62-71 seats.

According to India Today - Axis My India Opinion Poll BJP is set for fourth consecutive win in Gujarat Assembly Elections 2017. It predicts BJP will win 118 whereas INC would get 61 Seats. If INC forges an alliance with Hardik Patel then it might get 67 seats.