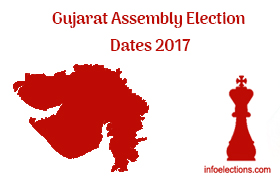 Gujarat Election Counting Dates 2017 - 18 Dec 2017 has been announced which will be held along with Himachal Polls.The Model Code of Conduct will come into force once the poll panel releases the election schedule.

According to latest Opinion Poll by ABP News and Leadtech BJP is leading with almost 60% votes share.

The 2012 Gujarat legislative assembly elections were held in two phases, the first on 13 December and second on 17 December 2012.Total voting turnout of both phases was 71.32%, highest since 1980. Results were declared on 20 December 2012. The fourteenth legislative assembly election will be held in 2017 to elect members of the 182 constituencies in Gujarat.

Campaigning tempo rose a notch on Tuesday with the beginning of filing of nominations for the Gujarat assembly elections.

CEC announces dates for Gujarat assembly election. Polls to be held in two phases — first phase poll to be held on 9 December and second phase to be held on 14 December.

The 2017 Gujarat Assembly election will take place in 2-phase.

The tenure of Gujarat assembly ends on 22 January 2018

Counting Dates for All constituencies has been declared but Voting Dates are yet to be declared. Mostly it will be held in 2 Phases just like it happened in last elections.

In 2012, Narendra Modi led, BJP won 116 seats out of total 182 seats and formed the government while INC won 60 seats. BJP has been in power in Gujarat since 1995. After bypolls in June and December 2013, BJP, has won more four assembly seats which were held by INC, increasing the tally of BJP in the assembly to 120, which is 3 more than the assembly election of 2007.