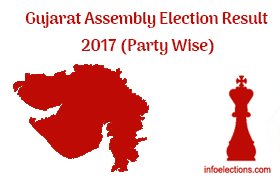 The 2012 Gujarat legislative assembly elections were held in the Indian state of Gujarat in December 2012 for all 182 members of the Gujarat Legislative Assembly. Incumbent Chief Minister Narendra Modi of Bharatiya Janta Party (BJP), in power since 2002, was running for his fourth term. The leader of the opposition was Shaktisinh Gohil of the Indian National Congress (INC).