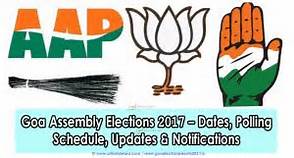 Goa Valpoi By Poll Election Results Live 2017 will be declared on 28th August. Counting will start from 8 am morning. It is an important elections for BJP and INC both.

The Valpoi bypoll was mandated after Vishwajit Rane, resigned as the Congress MLA and joined the BJP after the party-led government won the floor test in March this year.

Election Commission has released Valpoi by-election schedule. The notification will be issued on 29th July. The last date for filing nominations is 5th August. The polling will be conducted on 23rd August and the counting and results will be declared on 28th August. The model code of conduct would come into force once the notification is issued.