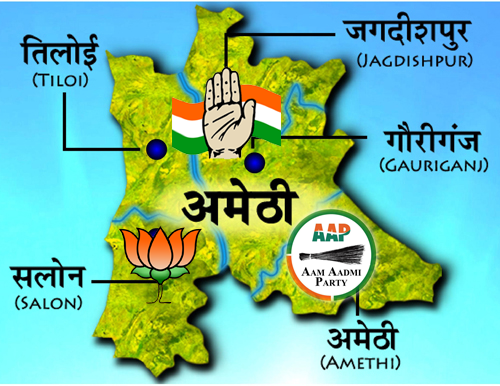 Amethi, 37.50 percent polling has been recorded so far whereas neighbouring Sultanpur from where Rahul's cousin Varun is contesting 35.60 percent voters have cast their votes.

In Amethi, the voting percentage is 27 per cent.

Rahul Gandhi objects to lotus symbol at a polling booth in Amethi, but did not register complaint with the Election Commission. In Amethi, while Vishwas is banking on the power of "aam aadmi", Irani is trying to cash in on Modi wave and by highlighting "lack of development" in Rahul's 10-year as MP.

10.4% voting has been recorded till 9 am in the constituency.

9:50 am Amethi is voting in strength to chose between Rahul Gandhi, Smriti Irani and Kumar Vishwas.