Find list of BJP, INC, BSP, SP and congress candidates who are contesting in Uttar Pradesh Vidhan Sabha Election 2017 from the different assembly constituencies of UP. BJP declared list of 149 Candidates for UP Elections 2017. INC and final Samajwadi Party (SP) tickets are awaited.

On May 12, six exit polls came out with their respective surveys. Five seemed (ORG, Cvoter, CSDS, Nieslen and Cicero) reasonable with their outcomes, but the one that was outrightly rejected.

Summary of all Uttar Pradesh Exit Polls After Alliance 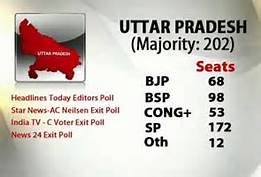