According to the Mood of the Nation poll, Congress vice-president Rahul Gandhi has emerged as the best alternative to challenge Prime Minister Narendra Modi in 2019.

The poll that puts debates to rest is here. Congress vice-president Rahul Gandhi has emerged as the best alternative to challenge Prime Minister Narendra Modi in 2019, according to the second edition of the Mood of the Nation poll. Here are the big takeaways: 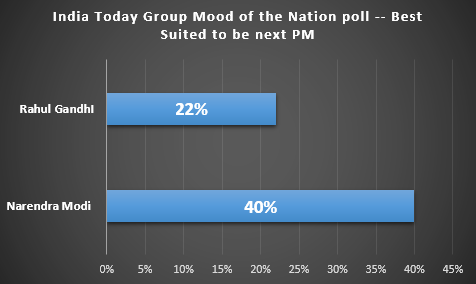 India Today Group Mood of the Nation poll was conducted by Karvy Insights Ltd. A total of 13,576 interviews were conducted across 97 Lok Sabha constituencies in 19 states: Andhra Pradesh, Assam, Bihar, Chhattisgarh, Delhi, Gujarat, Haryana, Jharkhand, Karnataka, Kerala, Madhya Pradesh, Maharashtra, Orissa, Punjab, Rajasthan, Tamil Nadu, Telangana, Uttar Pradesh and West Bengal. Eight starting points across four directions were selected in each of the assembly constituencies, and questionnaires were handed out following a rigorous right-hand rule of household selection. The fieldwork for the Mood of the Nation poll was conducted between Jan 24 and Feb 5. The survey followed multi-stage stratified random sample design. All interviews were conducted face-to-face. Poll was conducted under the supervision of Ranjit Chib and Dixit Chanana of Karvy Insights.