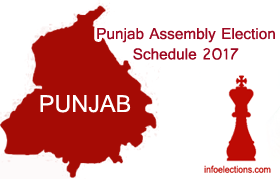 Punjab Assembly Election Schedule Dates 2022 would be held by February 2022 and the Results would be announced by March 2022. All 117 Constituencies will go on poll the same day.  Various Opinion polls have been published in which Latest ones shows Congress ahead of other parties. See Summary of all Opinion polls for Punjab here

20 Oct 16: The term of the Uttar Pradesh Assembly ends in May next, the terms of assemblies of Punjab, Goa, Manipur and Uttarakhand will end in March, 2017. Read More