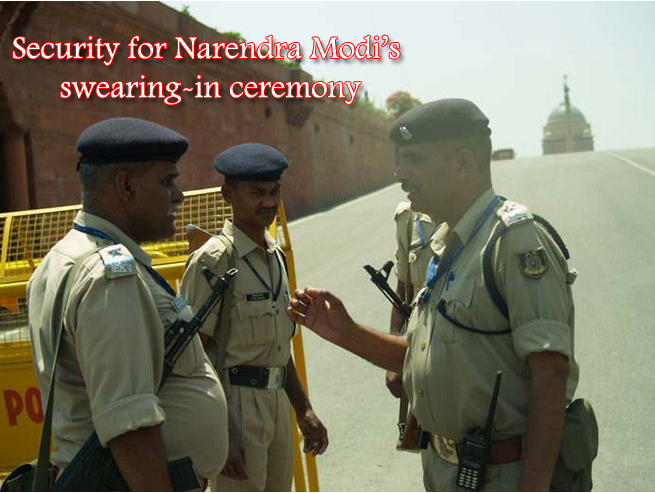 Narendra Modi, who led BJP to an astounding victory in the Lok Sabha polls, will be sworn in as the Prime Minister today in the forecourt of the majestic Rashtrapati Bhawan at a grand function to be attended by foreign dignitaries including SAARC leaders.

The swearing-in ceremony of the 15th Prime Minister of India would be attended by nearly 3,000 guests, including top leaders from SAARC countries like Pakistan Prime Minister Nawaz Sharif and Sri Lankan President Mahinda Rajapaksa.

The presence of foreign leaders with high threat perception like Pakistan Prime Minister Nawaz Sharif and Sri Lankan President Mahinda Rajapaksa at Narendra Modi's swearing in has led to a massive scale-up in security for the event .

More than 10,000 personnel are being deployed to secure the Rashtrapati Bhavan - where Modi will take the oath of office as Prime Minister - and hotels where top dignitaries are staying, as well as to manage traffic, making the security arrangement for the event on par with that for the Republic Day parade.

"Usually, there is one high-profile foreign leader for the Republic Day function. But the simultaneous presence of a galaxy of foreign heads, including those with high threat perception like Sharif and Rajapaksha, is a major challenge to ensure fool-proof security," a senior home ministry official said.

The National Security Guard (NSG) and Delhi Police, along with the Central Reserve Police Force, will be the main agencies in charge of security arrangements. Raisina Hill, the Lutyens' Delhi area that houses the Rashtrapati Bhavan and other key government buildings, will be sealed off five hours before the function.

All offices in the North and South Blocks will be closed by 1 PM, while snipers from the Army and NSG will be deployed on rooftops and at vantage points around the area. A full rehearsal of the event and sanitisation of the routes to be taken by the VIPs have been done on Saturday and Sunday afternoon.
Delhi, especially the Lutyens' zone, is expected to come to a virtual halt on Monday evening with diversions on all major routes between 2 PM and 8 PM to ensure smooth flow of the cavalcades of the VIPs.

There will also be top-notch security at five premium hotels where the VIPs will be staying - Sharif will be at Taj Mansingh and Rajapaksha at Taj Palace. "Delhi Police has taken over the security arrangements at these hotels.

The NSG will be assisting them," the home ministry official said. "Sharif and Rajapaksha are also getting their own security teams which will form the innermost cordon and Delhi Police will form the outer ring as well as give pilot and escort vehicles," this official said.

Anil Shukla, Delhi's joint commissioner for traffic, said the police have done elaborate security and traffic arrangements for the "smooth conduct of the function and for the invitees in reaching the venue conveniently" Meanwhile, the Special Protection Group will take over the security of Modi from the NSG and Gujarat Police at the swearing-in function itself.

The SPG had decided to dedicate more than 5,000 of its men for the security of the new Prime Minister and has done a close analysis of intelligence inputs indicating major threats to Modi from terrorists.

While giving security to the highprofile guests on Monday and Tuesday will be the responsibility of the NSG and Delhi Police, the SPG will manage the security of Modi at the swearingin event and after that.