After UP , BJP has set eyes on winning maximum seats from bihar in the upcoming Lok Sabha elections 2014 .

Besides Uttar Pradesh, no state occupies a prime position in the BJP's 'Mission 272+' plan like Bihar.
And, it comes as no surprise that the BJP has set eyes on winning maximum seats from the eastern state - a sort of mini-decider - in the 2014 Lok Sabha elections.

In Bihar, the BJP is busy planning three big rallies for Narendra Modi at Muzaffarpur, Purnia and Gaya to reap dividends from the Modi wave. The first of these rallies will be held at Muzaffarpur on March 3.

Dates for the remaining two rallies are yet to be finalised.

Meanwhile, the party workers have been instructed to highlight the "betrayal" of Nitish Kumar. 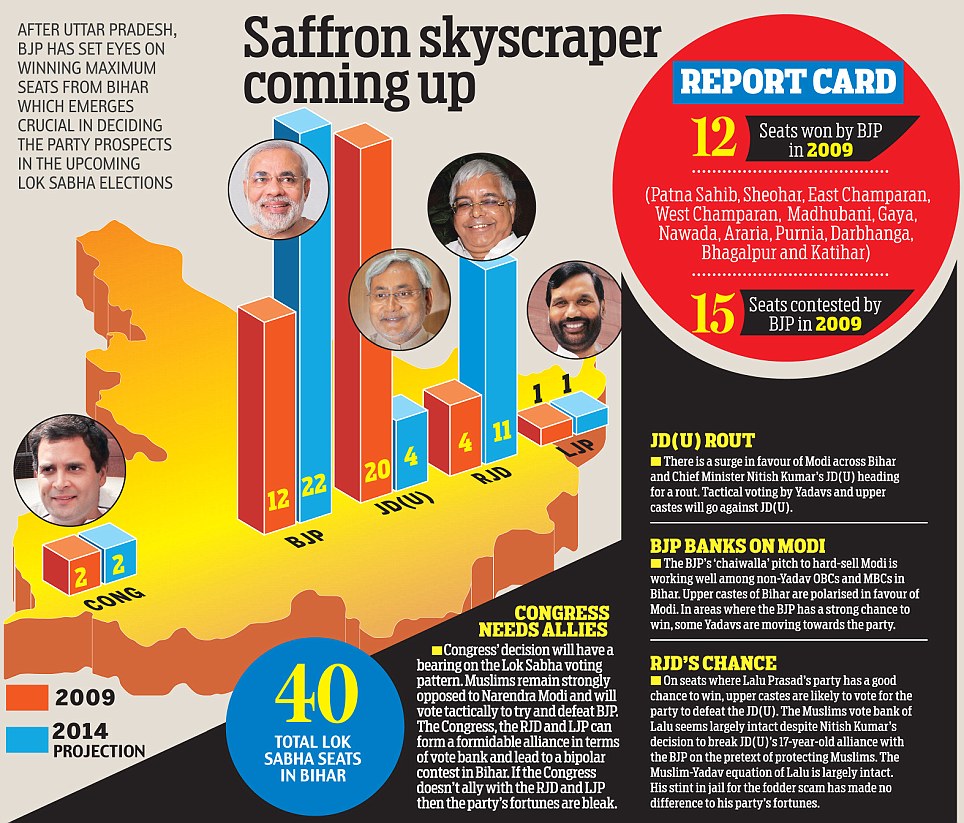 Under the Loh Sangrah campaign for building a giant statue of Sardar Patel, the party has already taken the message of 'NaMo for PM' to the people in Bihar.

"BJP prime ministerial candidate Narendra Modi has now got a mention in every household. Now it's time to work upon the Modi momentum in the state," state BJP chief Mangal Pandey says.

According to the India Today Group-CVoter Mood of the Nation opinion poll, the JD(U) could end up with just four seats in this year's general elections, down from 20, while the BJP can bag up to 22 seats, up from 12. Lalu Prasad's RJD could win as many as 11 seats.

The BJP leaders believe that there is a strong Modi wave which will help the party win a majority of Bihar's 40 Lok Sabha seats.

"We will see if we can add a couple of more rallies before the poll campaigns come to an end, as both Bihar and UP are decider. Between the two states, the BJP is aiming to get at least 60-plus seats,'' C.P. Thakur says.

Social strata and classes - a vital aspect of Bihar and UP politics - have been kept in mind while planning rallies in the two states. For instance, the Muzaffarpur rally is meant to make a dent into the traditional stronghold of Lalu's RJD in north Bihar.

"There is a strong upper caste vote bank which earlier dented RJD and voted Nitish anticipating an alliance (of JD(U) and BJP). But people left disenchanted with the Nitish government, we'll try to make the most of Modi wave,'' Pandey says.

Adds Thakur: "Even in Purnia where another rally is planned, we have a party MP there as well as in two LS seats Araria and Katihar. We had only lost the Kishanganj seat and hope to reclaim that back as well.''

In Gaya, the party will be playing Modi's OBC background as it is a reserved constituency. At present, the BJP's Hari Manjhi represents the Gaya constituency.

Pandey has been meeting the local Gaya leadership in rural and urban pockets to plan the Modi rally since January first week. He had held a meeting with the locals before coming to Delhi for National Council meeting.

Interestingly, the BJP in Bihar is also on the lookout for people from the state who have migrated to Gujarat for livelihood. Sources said the party wants these migrants to speak at Modi's Bihar rallies to highlight the differences between Gujarat and Bihar in terms of development. The party cadres have been specifically asked to identify such people before the rallies.

Nitish meets Left leaders
Bihar Chief Minister Nitish Kumar and the Left leaders on Monday had a breakfast meeting with other leaders to discuss the formation of a non-Congress, non-BJP alliance for the next Lok Sabha polls.

The informal meeting took place at the residence of JD(S) chief and former Prime Minister H.D. Deve Gowda, in which it was decided that leaders of 11 non- Congress non-BJP parties, who recently came together in Parliament, will hold a formal meeting after the extended winter session is over to give concrete shape to the Third Force.

Sources said one or two common public rallies to give the message of unity of a non-Congress, non-BJP force in the next general elections may be held but the plans will concretise only after the meeting.

Since the Bihar Chief Minister was in the Capital, it was decided to evolve a strategy to forge a non-Congress, non-BJP formation ahead of the next Lok Sabha polls

Underlining the importance of the upcoming Lok Sabha elections for the JD(U) in Bihar, Chief Minister Nitish Kumar believes his government may not last long if his party fails to win enough seats in the state.

"Lesser number of seats in the Lok Sabha polls mean reduced power in Delhi which might even lead to the fall of the state government," Nitish said while addressing JD(U)'s Sankalp rally in Saharsa recently.

Reminding the people that power alone is worshipped at the Centre, he made an impassioned plea to the people to elect JD(U) candidates from all 40 Lok Sabha seats in Bihar.