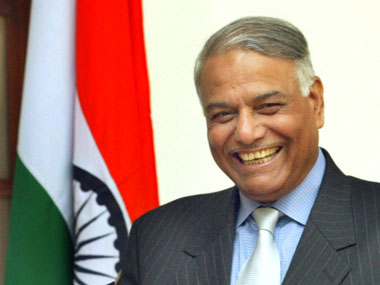 Yashwant Sinha was born ( 6 November 1937 in Patna) in Patna, Bihar into a Kayastha family. Sinha is an Indian politician and a former finance minister of India (1990–1991 under Prime Minister Chandra Shekhar and March 1998 – July 2002 under Prime Minister Atal Bihari Vajpayee) and foreign minister (July 2002 – May 2004) in Atal Bihari Vajpayee's cabinet.

He is a senior leader of the Bharatiya Janata Party (BJP) which is now the single most dominant party of the Indian parliament after the 2014 general election. His son Jayant Sinha, a consultant and investor, won the 2014 elections for the Hazaribagh constituency.

Sinha joined the Indian Administrative Service in 1960 and spent over 24 years holding important posts during his service tenure. He served as Sub-Divisional Magistrate and District Magistrate for 4 years. He was Under Secretary and Deputy Secretary in the Finance Department of the Bihar Government for 2 years after which he worked in the Ministry of Commerce as Deputy Secretary to the Government of India.

From 1971 to 1973, he was First Secretary (Commercial) in the Indian Embassy, Bonn, Germany. Subsequently, he worked as Consul General of India in Frankfurt from 1973 to 1974. After working for over seven years in this field, he acquired experience in matters relating to foreign trade and India's relations with the European Economic Community. Thereafter, he worked in the Department of Industrial Infrastructure, Government of Bihar State and in the Ministry of Industry, government of India dealing with foreign industrial collaborations, technology imports, intellectual property rights and industrial approvals.

He later was Joint Secretary to Government of India in the Ministry of Surface Transport from 1980 to 1984, his main responsibilities were road transport, ports and shipping. He resigned from service in 1984.

Sinha resigned from the Indian Administrative Service in 1984 and joined active politics as a member of the Janata Party. He was appointed All-India General secretary of the party in 1986 and was elected Member of the Rajya Sabha (Upper House of the Indian Parliament) in 1988.

When the Janata Dal was formed in 1989, he was appointed General Secretary of the party. He worked as Minister of Finance from November 1990 to June 1991 in Chandra Shekhar's Cabinet.

Lecturer, Political Science, Patna University, 1958-60; joined I.A.S. in 1960; Deputy Commissioner, Santhal Paraganas; Chairman, (i) D.T.C., Delhi and (ii) Drafting Committee of the UNCTAD Conference on Shipping in Geneva; Consul-General of India, Frankfurt, West Germany; Principal Secretary to Chief Minister, Bihar; Joint Secretary to the Government of India in the Ministry of Shipping and Transport; and sought premature voluntary retirement from I.A.S. in 1984 to join politics