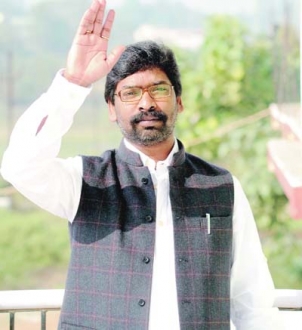 Hemant Soren (born 10 August 1975) is the 5th Chief minister of Jharkhand, a state in Eastern India. Formerly, he was a Deputy Chief Minister in the Arjun Munda ministry. He belongs to the Jharkhand Mukti Morcha political party. Early life :Soren was born in Nemra in Ramgarh district, Bihar to Roopi and Sibu Soren, former Chief Minister of Jharkhand. Hemant has two brothers and a sister. His educational qualification is Intermediate from Patna High School, Patna.

Hemant started his political career on December 23, 2009 by getting elected as MLA. On June 24, 2009 he became member of Rajya Sabha. On September 11, 2010, he became Jharkhand Deputy CM and remained in that position till January 8, 2013. He assumed the CM’s chair on July 13, 2013 and is the incumbent Chief Minister of Jharkhand. Some of the major departments he has held include Planning & Development, Cabinet (Election and Vigilance), Home, Cabinet Co-ordination, Information and Public Relations, Administrative Reforms & Raj Bhasha, Law, and others.