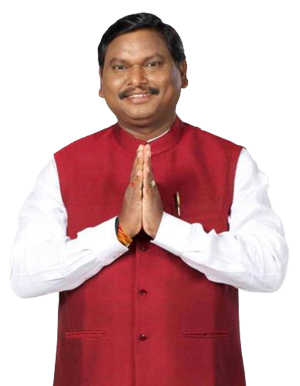 Arjun Munda (born 3 May 1968 in Khrangajhar, Jamshedpur) is the Ex-Chief Minister of the Indian State of Jharkhand. Currently he is the Leader of Opposition in the State Assembly. He has also served as a member of parliament having been elected to the 15th Lok Sabha from the prestigious Jamshedpur constituency in the 2009 parliamentary elections. BJP's central leadership also appointed him a National General Secretary of the party recognising his strong credentials as a popular mass leader and his significant contributions in strengthening the party in his state.

An avid golfer Arjun Munda is also interested in promoting archery at national and international levels. He plays flute and almost all tribal musical instruments widely used in the area with the flare of a pro.

Arjun Munda was born on 3 May 1968 in Khrangajhar, Jamshedpur to a humble and religious family of Late Ganesh and Saira Munda. After completing high school education in Jamshedpur area he graduated from Ranchi University and went on to earn a PG Diploma in Social Sciences from Indira Gandhi National Open University.

Arjun Munda diffused the tension that was created due to "Domicile movement"during the year 2001–2002 and insisted that each and every citizen of India had the fundamental right granted by the Indian Constitution to live and work in any part of the country. During his tenure Jharkhand got the 1st Lokayukta and the State successfully conducted the 34th National Games in 2011. Also, a 32-year long jinx was broken when Jharkhand scripted history by conducting Panchayat Elections and empowered PRIs for participatory governance. His government introduced e-tender system in government contracts to bring transparency and efficiency and to provide equal opportunity in the procurement process. He also took initiatives for setting up of new power plants with a view to making Jharkhand a power surplus state. Last but not the least he introduced some of the famous welfare schemes and programs that were later emulated by few other Indian states such as: