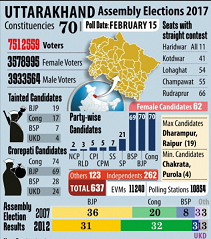 A Legislative Assembly election will be held on 15 February 2017 in a single phase for the 70 seats of the Vidhan Sabha in the state of Uttarakhand in India. In the previous election in 2012, none of the parties won majority but the Indian National Congress formed government with the help of PDF in the leadership of Vijay Bahuguna.

As per ECI no Exit Poll between 4th Feb and 8th March 2017.Live 2017 Percentage Updates

In the previous election in 2012, BJP and INC had almost equal no of seats.