If elections in Uttarakhand are held today, the BJP may win 38-43 seats in the 70-member Assembly, reducing the incumbent Congress to 26-31 seats, according to the India Today-Axis opinion poll in the state which will vote in early 2017. 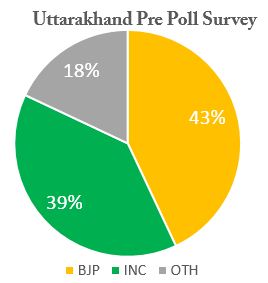 The survey also found nearly half of the voters in the Himalayan state want BJP veteran BC Khanduri to return as their Chief Minister. Also, an overwhelming 86 per cent of those polled want the 82-year-old leader to be named the BJP's chief ministerial candidate.

Incumbent Harish Rawat, however, has not done bad either in the opinion poll with nearly 41 per cent of the respondents saying they want the Congress leader to remain their Chief Minister. Almost all those surveyed (96 per cent) also wanted the Congress to retain Rawat as its chief ministerial candidate.

The others who made it to the next Chief Minister list include Ramesh Pokhriyal (4 per cent), Bhagat Singh Koshiyari (3 per cent), Satpal Maharaj (2 per cent), and Indira Hridyesh (1 per cent).

When asked what is the biggest election issue for the voters in Uttarakhand, a majority of them (64 per cent) mentioned development. Moreover, 79 per cent of the voters said they will vote on the basis of development.

That perhaps explains why the BJP, with its promise of growth, has found more resonance than the Congress in the state.

Like in four other states where the India Today-Axis survey was conducted, employment remained a major election plank in Uttarakhand too with 15 per cent saying they want more jobs.

Inflation (9 per cent), corruption (6 per cent) and the controversy over President's Rule ans the subsequent change of government earlier this year remained an issue for 3 per cent of the voters.

When asked for their views on the removal of the Harish Rawat government and the subsequent imposition of the President's Rule, most voters (41 per cent) said it was a wrong decision, while 31 per cent agreed with the Centre's move. More than one-fourth (28 per cent) of the respondents were not sure.

On March 18 this year, nine Congress MLAs rebelled against Chief Minister Rawat. The BJP met the Governor the same day and staked claim to form the government.