The poll for Punjab was conducted by CVoter using its Computer Assisted Telephone Interviewing method in the fourth week of January, on a representative sample of 19,417 respondents covering all 117 seats. The margin of error was +/-3% at the state level and +/-5% at the region level.In Punjab, the Akali Dal combine's voteshare is expected to halve and the Congress' reduce by seven percentage points as the AAP which is expected to sweep to power with a 36.8% voteshare, making it a larger margin of victory than the Akali Dal's in 2012.

Aam Aadmi Party's impact on national politics is not about to be limited to Delhi. With less than a year to go for elections to the 117-member Assembly in the key farm state of Punjab, the Arvind Kejriwal-led party is the act to beat, an exclusive HuffPost-CVoter tracking poll shows.

The seat projections according to the poll will make AAP supporters a happy lot, while the Congress, incumbents Bhartiya Janata Party (BJP) and its partner Shiromani Akali Dal (SAD) will want to look closely at the drawing board, as crucial months are still ahead of them.

Conducted in February 2016, the survey shows a consolidation of favourable sentiment in favour of AAP from the same time last year.

"This is not coming as a shock because AAP's upswing was noticed in late 2013 and early 2014. It has further consolidated," said Yashwant Deshmukh, founder of CVoter.

The latest CVoter-HuffPost poll has the Congress Party trailing in the second position with 8-14 seats in the Assembly, down from the 12-18 seats projection, last year. The SAD-BJP alliance comes in third with 6-12 seats, down from 13-19 seats, last year.

If the election was held today, 48 percent would vote for AAP.

In the 2012 State Assembly Election for Punjab, SAD won 56 seats followed by the Congress Party with 46 seats, and the BJP with 12 seats. 78 percent of respondents said that they wanted a change in government, indicating a huge wave of anti-incumbency.

Unemployment, drug abuse and corruption were identified as the three main problems of Punjab.

Who Will You Vote For If The Elections Were Held Today?

59 percent of respondents, last month, said that Kejriwal should be declared the chief ministerial candidate of Punjab, and 51 percent said they would chose Arvind Kejriwal over Amarinder Singh, who served as Chief Minister from 2002 to 2007, and is likely to be the Congress Party’s candidate in the state election.

Between Kejriwal, Badal, Capt, who would you pick as Punjab CM? 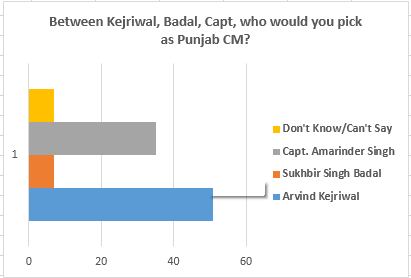 But when Kejriwal was replaced by Bhagwant Mann in a question about who would be the best Chief Minister for Punjab, AAP’s lawmaker from Sangur was placed third. Only 11 percent of respondents chose him as the best candidate for Chief Minister, down from 26 percent in 2015.

It isn't clear why Mann's popularity has plummeted. But the internal fighting within AAP and the incident of him showing up drunk at a Gurudwara probably haven't helped his cause.

But the veteran leader's influence and goodwill in the state isn't helping his son, Sukhbir Singh Badal, who got only a dismal three precent of respondents backing him as Chief Minister.

Who is the best candidate for CM post of Punjab?

The data suggests that the success of a party in the Punjab election will depend on the popularity of its leaders.

Amarinder Singh has elbowed the Congress Party into a slightly better situation than last year, giving it a slight edge over the BJP, but is at this point no threat to AAP's surge.

But AAP's surge could be arrested if the party is fronted by anyone other than Kejriwal. It remains to be seen whether AAP declares a chief ministerial candidate.

A scenario popular among AAP supporters is one where the party elevates Delhi Deputy Chief Minister Manish Sisodia to the Chief Minister's post and Kejriwal leads the campaign from the front as the chief ministerial candidate in Punjab.

The AAP feels hobbled running Delhi, where it doesn't have control over municipal bodies or the police, whereas running Punjab would give it the necessary space and leverage to implement its ideas.

With nine months still left to go for the Punjab election, analysts believe that the competition could stiffen if the Congress Party can figure out a way of using Amarinder Singh popularity, and the SAD-BJP could figure out a way of stopping its slide. 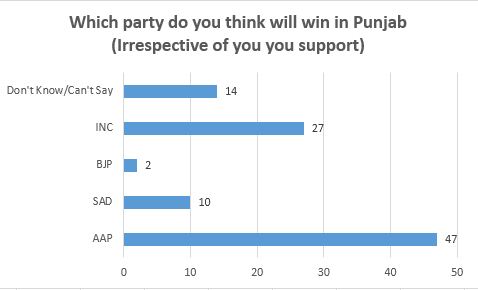 In the scenario with no Kejriwal, the poll has 10 percent of respondents opting for him as their favourite to be Chief Minister, which is lower than the 14 percent last year.

Sidhu won Amritsar for the BJP three times in Lok Sabha elections, but he was sidelined because of differences with SAD's leadership. In the 2014 national election, BJP fielded Arun Jaitley instead of Sidhu from Amritsar. Jaitley lost.

Deshkmukh said that BJP should be kicking itself for "disowning" Sidhu.

"BJP is going to be the biggest loser in Punjab," he said.