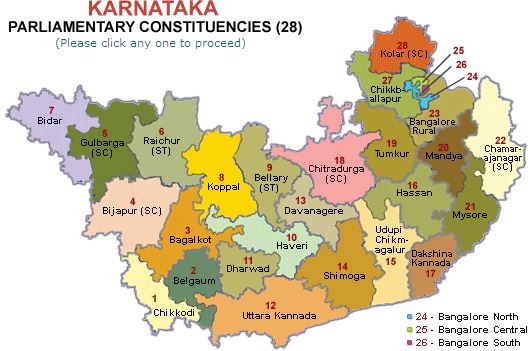 Around 33.13 per cent of the 4.62 crore electorate have exercised their franchise till around noon in the single-phase polls today in Karnataka, where the ruling Congress and BJP are battling it out in a hot contest for 28 seats.

Voting across the State got off to a moderate to brisk start, as it began at 7 am and was reported at about 10 per cent in the first two hours and reached around 25 per cent in five hours, officials said.( Complete 5th phase of lok sabha poll )

In the prestigeous contest in Bangalore South, where Infosys co-founder Nandan Nilekani is pitted against five-time MP BJP’s Ananth Kumar, the voter turnout was impressive reaching 30 per cent around noon.

Polling was however moderate in other two Bangalore Constituencies – North and Central.

Some 85,000 security personnel, including the central forces, are providing security cover across the state with 54,294 polling booths, 8,658 of which are identified as hyper sensitive and 14,400 as sensitive.

The Election Commission has introduced Voter Verifiable Paper Audit Trail (VVPAT) system on an experimental basis in Bangalore South, which is among the seven constituencies in the country to be chosen for it.

VVPAT is a printer with drop box. It prints and displays a slip for seven seconds after the vote is cast so that a citizen can also see who they cast their vote for. The slip will then get automatically dropped into the drop box next to the Electronic Voting Machine and can’t be retrieved.

Udupi-Chikkamagalur had reported about 35 per cent voting till noon, topping the constituencies that reported brisk polling, officials said.

In the 2009 polls, BJP, then holding the reins of power, had bagged 19 seats, leaving six to Congress and three to JDS.

Both Congress and BJP have been claiming that they are within the striking distance of winning 20 seats. The two parties are in direct face-off for 22 seats and in the rest, JDS is also a serious player.

Arvind Kejriwal’s Aam Aadmi Party is also seeking to gain a toehold, fielding candidates for all constituencies, the prominent being former Infosys Director Balakrishnan who is in the fray from Bangalore Central.