Thank all Delhiites for having voted in such GOOD Number.Hope to see R Delhi now make positive headlines,collaborative not confrontational. Kiran Bedi tweeted

3:05 pm: With just hours left before polling comes to a close, Delhiites are coming out in strength to cast their votes. 46% voting has been recorded till 2 pm.

2:38 pm: BJP President Amit Shah holds meeting with party leaders to assess voting in Delhi. Senior leaders Dharmendra Pradhan, Prabhat Jha, Ravi Shankar Prasad among others present in the meeting. Sources say if the voting percentage crosses 65 per cent, it means people across the society are voting and it's good news for the BJP.

Polling slowed down in many places. Long queues. Its taking 2 hrs in some places. Voters returning(1/3)

As per rules, 3 voters r allowed inside booth at a time. They r allowing only 1 voter, which has slowed down voting(2/3)

Even lunch breaks being taken which is against rules. EC shud immediately intervene(3/3)

1:54pmUnion Minister Ravi Shankar Prasad says, "People are coming out and voting for a strong government and effective governance. That's why there is a desperation in AAP."

1:50 pm: AAP files complaint to Election Commission against Kiran Bedi for violating model code of conduct in Krishna Nagar by holding padyatra and asking for votes.

1:37pm BJP candidate from New Delhi constituency Nupur Sharma calls AAP an anti-woman party. She alleges that AAP volunteers tried to manhandle her and her girl collegues around 11.45 AM at Princess Park near India Gate. "My uncle's daughter was manhandled. If it would have been me, I would have created a big issue," says Nupur.

1:10pm 24 per cent voters exercise their franchise till noon

12:30pm "Vote for those who do honest politics and can stop bribery.....those parties who have distributed liquor, don't vote for them. Don't vote for the parties those call poll promises a political metaphor," tweets Kejriwal.

12.10 am: Responding to Arvind Kejriwal's charge that parties have distributed money and liquor last night to influence voters, former CM Shiela Dikshit said, "Hasn't he done that that as well?", adding sarcastically, "One who is caught is the thief."

12:07pm: Congress leader Sandeep Dikshit confident of the party faring well in the poll. "We will do very well. Surveys are some indication but not the reflection of true picture. Strangely people call AAP a secular front but it''s not. We have to be equidistant from both," says Dikshit.

11:48am :BJP leaderJagdish Mukhi reaches polling booth in Janakpuri to cast his vote.

11:47am :Chief Election Commissioner HS Brahma says the voting is going on fine and teams are there at all places.

11:41: Former chief minister Sheila Dikshit reaches Nizamuddin to cast her vote. "Let the results come out. We will see who will need what. I've not said we should support. People should vote for good governance." 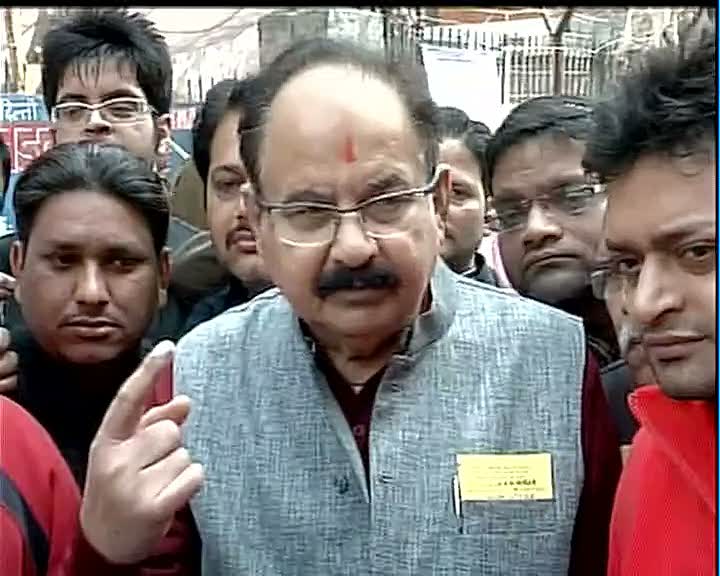 11:27 am:  "Vote for those who do honest politics and can stop bribery.....those parties who have distributed liquor, don't vote for them. Don't vote for the parties those call poll promises a political metaphor," tweets Kejriwal.

11:10 am: President Pranab Mukherjee's daughter Sharmistha, who is the Congress candidate from Greater Kailash, casts her vote.

10:55am: Congress candidate Kiran Walia says party is still in the race. "People want a government, they want a government to deliver not just those who talk. Let the results come out, we reside in people's hearts."

10:40am People of Jhangola village in Narela constituency boycott Delhi polls. No voting registered till now.

10:25 am: I am confident, looking forward to a new Delhi, I will work till the end, we have to make Delhi a world-class city - Kiran Bedi

10:10 am: Arvind Kejriwal casts his vote at a polling booth at Khalsa Girls School, Lodhi Road.

9:34 AM Congress candidate Sharmistha Mukherjee says, "I am wrking towards safety, security, traffic, parking. It is too early to respond but I have got good response so far."

9:20 AM: Kiran Bedi casts her vote - Kiran Bedi, BJP's chief ministerial candidate in Delhi, cast her vote Saturday at a polling booth here and asked people to vote for "clean, literate and safe Delhi". "Today is a historic day for Delhiites. It's the day for them to decide what type of Delhi they want," Bedi said after casting her vote in Uday Park in South Delhi. She urged Delhiites to vote for "clean, literate and safe Delhi". After casting her vote, Kiran Bedi stood on the car roof and posed for the cameras.

8.24 AM: Delhi Votes for 70 Assembly Constituencies -Over 13.3 million voters are eligible to cast their ballot in a contest that has 673 candidates. A total of 11,763 polling booths have been set up across Delhi. The main battle is between the Bharatiya Janata Party (BJP) and the Aam Aadmi Party (AAP), while the Congress will try to retain its tally of eight seats.


8.14 AM: Vote in large numbers, PM urges Delhiites- Prime Minister Narendra Modi Saturday urged the voters in Delhi to exercise their franchise in large numbers in the assembly polls. "As Delhi votes today (Saturday), urging voters to go out and vote in large numbers," the prime minister tweeted. I particularly call upon my young friends to vote in record numbers," another tweet said. Voting for the 70-member Delhi assembly began at 8 a.m. Saturday

Delhi Elections would be conducted on all 70 constituencies on 7th Feb 2015. And the results will be out on 10th Feb 2015. Check out following links to keep yourself updated with latest developments.