Philippine presidential front runner Rodrigo Duterte was leading in early unofficial results on Monday (May 9) after voting for the country's general election closed in most areas at 5pm. 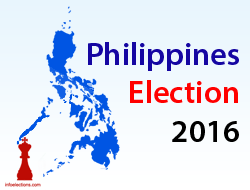