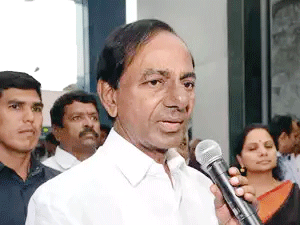 Even though KCR has left everyone guessing on whether he would opt for early polls, political circles have managed to read two signals from the CM  moves: His decision to convene a meeting of the state cabinet on Thursday could be to recommend the assembly’s dissolution.

A day later  KCR has convened a mega event at Husnabad . The place from where he launched the TRS election campaign in 2014  to launch the first of the 100 Pracha Ashirwad mass contact programmes as part of his campaign plank.

While deciding the poll dates is The Election Commission prerogative  Telangana politicians including the Opposition think the Centre will not spoil friendly ties  with Rao.

They see three reasons for KCR to delink assembly polls from the Lok Sabha elections: Opposition parties are not yet fighting fit in Telangana and the CM would want to deny them time to get their act together.

This is important as TRS is wary that the traditional turf rivals Congress and TDP may work out an unconventional regrouping like SP-BSP by the time LS polls are due  after TDP voted along with the Congress in the no-confidence motion and Rajya Sabha deputy chairman election recently.

Secondly  they say KCR would prefer to have assembly elections along with Rajasthan and MP and Chhattisgarh and Mizoram as a Congress victory in any of the BJP states may result in the  Telangana Congress putting up a big fight during the Lok Sabha polls. when simultaneous polls to Telangana are due.

Thirdly: TRS in direct or indirect alliance with Asaduddin Owaisi’s AIMIM, may be in a better position to secure around 12% minority votes if assembly .

polls are not held simultaneously with LS polls  when the Modled BJP campaign for a second term and TRS perceived closeness to the Centre may prompt minority voters to prefer the Congress-led Opposition.