Hyderabad: Telangana Rashtriya Samiti (TRS) chief K Chandrashekhar Rao was on Monday sworn in as the first Chief Minister of Telangana, which became the 29th state of India.

Rao was administered the oath of office and secrecy by Governor ESL Narasimhan in a simple ceremony at the Raj Bhavan here around 8.47 am.

Congrats to K Chandrasekhar Rao Garu on taking oath as Telangana's 1st CM. My best wishes to people for the state's development journey.

India gets a new state! We welcome Telangana as our 29th state. Telangana will add strength to our development journey in the coming years.

Telangana's birth comes after years of struggle and sacrifices by several people. We pay our respects to them today.

Home Minister Rajnath Singh also tweeted, “Congratulations to Shri K. Chandrashekhar Rao on taking oath as the first Chief Minister of the new Telangana state. My good wishes to him.”

Ahead of the swearing-in ceremony, the Home Ministry announced this morning that President's Rule in newly-created Telangana region has been revoked.

The Central rule would, however, continue in the residual AP until TDP chief N Chandrababu Naidu takes charge as chief minister, which is likely on June 8. 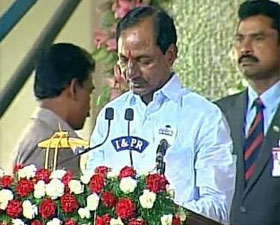 Before taking oath, the TRS chief paid tributes to the martyrs of Telangana at Gun Park near the Legislative Assembly. Celebrations began here and all across Telangana on Sunday night to rejoice at the culmination of the decades-old struggle in the region for carving out a separate state from Andhra Pradesh.

TRS, Congress and other political parties as well as pro-Telangana groups planned a number of events in Hyderabad and elsewhere to celebrate the realisation of the decades-long dream.

Telangana supporters gathered at People's Plaza at the picturesque Hussain Sagar Lake where cultural programmes and a dazzling display of fireworks were among the scheduled events. 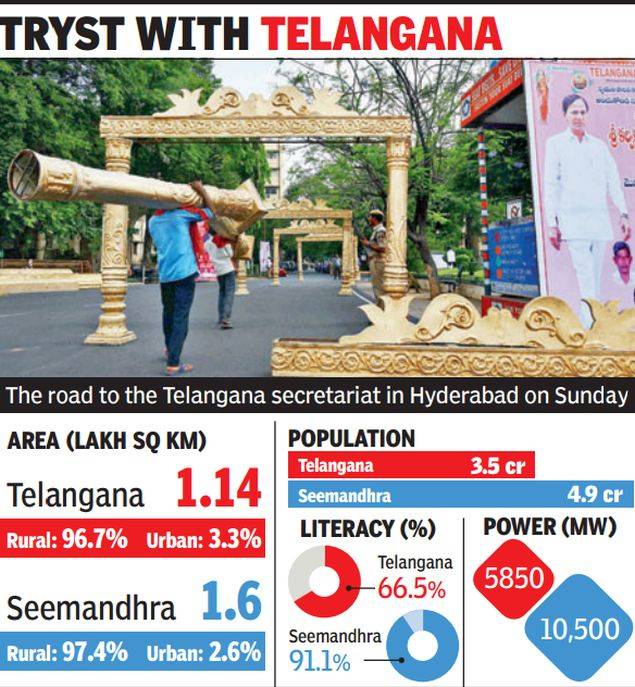 After taking oath as first chief minister of separate Telangana, Chandrasekhar Rao would attend the official celebration of 'Telangana Formation Day' at the sprawling Parade Grounds in Hyderabad.

KCR will chair the first Cabinet meeting where he is expected to sign the first file relating to the logo of the Telangana state. The journey towards achieving the goal of separate Telangana has been momentous and there have been a number of milestones in the saga.

In 1956, Andhra and the then Hyderabad state were merged to form Andhra Pradesh, the first state to be formed on linguistic basis in the country.

A group of Congress MLAs from Telangana submitted a memorandum to party president Sonia Gandhi in 2000 demanding separate statehood to the region.

The separate Telangana agitation got a huge boost in 2001 when the then TDP leader K Chandrasekhar Rao quit the party and launched the Telangana Rashtra Samiti (TRS) to fight for separate state.

TDP announced support for separate Telangana demand in 2008 and it joined hands with TRS for the 2009 Lok Sabha and Andhra Pradesh Legislative Assembly Elections.

The Telangana agitation grew subsequently after chief minister YS Rajasekhara Reddy died in a chopper crash in September 2009 as he was seen as a formidable opponent of separate Telangana.

The TRS president began a fast-unto-death towards the end of 2009 and the then Union home minister P Chidambaram announced on December 9, 2009, that steps would be taken for formation of separate Telangana.

In the wake of strong protests in Coastal Andhra and Rayalaseema, the Centre set up a commission, headed by retired Supreme Court judge BN Srikrishna, for more consultations on the issue.

The Commission presented six options to the Centre. On July 30, 2013, the Congress Working Committee (CWC) favoured formation of separate Telangana. The Union Cabinet approved the proposal to divide Andhra Pradesh in October 2013.

After the Union Cabinet approved the bifurcation, a Group of Ministers (GoM) was appointed to go into the issue of AP's division.

The Union Cabinet approved the draft AP Reorganisation Bill on December 5, 2013, based on the recommendations of the GoM. President Pranab Mukherjee referred the Bill to the AP Legislative Assembly for its views. The Bill was, however, rejected by the Assembly on January 30 this year amid din.

The Bill was tabled in Parliament for passage and the Lok Sabha witnessed unprecedented scenes with a group of Congress MPs moving a no-confidence motion against the UPA government.

Uproarious scenes were witnessed in Lok Sabha with Seemandhra MP L Rajagopal using pepper-spray, though the Bill was passed in Parliament with the support of BJP.

Chief Minister N Kiran Kumar Reddy, who raised a banner of revolt against the decision to divide AP, resigned from his post when the Lok Sabha passed the Telangana Bill in February this year.

The process of bifurcation of Andhra Pradesh began following the passage of the Bill in Parliament and June 2 was declared as the 'Appointed Day' when Telangana would come into existence as the 29th state of India.

In the Lok Sabha and Assembly Elections held last month, the ruling Congress suffered a humiliating defeat both in Seemandhra and also Telangana.

With 63 of 119 Assembly seats, TRS bagged majority in Telangana paving way for the party's president K Chandrasekhar Rao to be sworn in as the first chief minister of the new state on Monday.