The BJP-led National Democratic Alliance decimated its political rivals in all the five States where Assembly elections are due in the next four to 18 months. Currently all these States are ruled by the BJP’s rivals

The difference in votes polled by the BJP and its allies and the ruling combines in these States is bound to send jitters among the incumbent formations, more so as the BJP is about to form the government at the Centre with numbers that have eluded any single party in the last three decades. The term of the assemblies of Maharashtra, Haryana, Jharkhand and Jammu and Kashmir are due to end in around six months.

As has been the case with the conduct of State Assembly elections, the Election Commission holds elections together in all the States where the gap in the tenure of the assemblies is about three to four months.

In all probability, elections to these four State assemblies are likely to be held in early October. The term of the Haryana Assembly, which is the first State where election is due after the 16th Lok Sabha election, expires on October 14. The term of the assemblies of Jharkhand and Jammu & Kashmir ends in January.
In Bihar, which plunged into a political crisis after Chief Minister Nitish Kumar quit on Saturday owning “moral responsibility” for the crushing defeat of his party in the Lok Sabha election, elections are due in November 2015.

In Maharashtra, which is ruled by the Congress-Nationalist Congress Party alliance, the BJP-Shiv Sena combine polled a whopping 47 per cent votes in the Lok Sabha election, bagging 41 of the 48 seats in the state. In contrast the Congress-NCP alliance got 34 per cent vote and just six seats. In Haryana, again under the command of the Congress, the BJP-Indian National Lok Dal together polled close to 60 per cent of votes, netting nine of the 10 Lok Sabha seats in the State.

After the resignation by Chief Minister Nitish Kumar in Bihar, parties and analysts fear more in at least Jharkhand, Delhi,Assam and Uttarakhand

Even though the ruling party leaders insisted Nitish's decision had nothing to do with the number of the legislators and the party staked its claim to form the government again under a new leader on Monday, Opposition leaders such as Sushil Kumar Modi of the Bharatiya Janata Party (BJP) and Ram Vilas Paswan of the Lok Janshakti Party (LJP) appear to have visualised the collapse of the state government in near future.

Jharkhand: "The Jharkhand government is on the brink of collapse anyway because two of its sitting legislators have walked over to other parties and contested Lok Sabha elections. They have won." 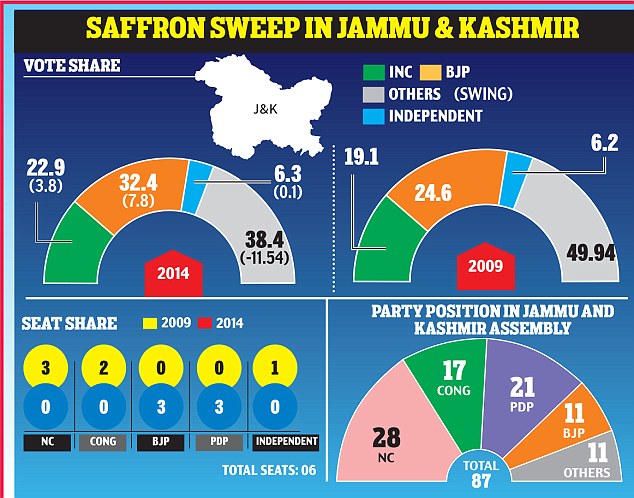 The mandate has been fractured and divided between 13 parties, including the BJP and the Congress. Of 81 seats, the Jharkhand Mukti Morcha (JMM) and the Bharatiya Janata Party (BJP) have 18 each.

The Congress and Jharkhand Vikas Morcha have 14 and 11 members, respectively, in the Assembly. Rest are shared between the All Jharkhand Students Union, Rashtriya Janata Dal and others.

Hemant Soren-led JMM, in alliance with the Congress, rules the state.

Jammu & Kasmir: PDP and BJP may join hands in J&K

After the rout of the Congress- NC coalition in the general elections, the chances of the BJP and the PDP coming together for the Jammu and Kashmir Assembly elections have gone up in the state.

"There is every possibility that the PDP will sweep the Kashmir Valley and the Muslim majority belts of Jammu, and the BJP sweeping across Jammu," columnist in Greater Kashmir, Riyaz Ahmad said.

"The reason for this is the Congress at national stage has been routed and also, the time required to bounce back for the ruling coalition is too short."

Delhi: Relections is on the way

There are enough indications of the BJP not making claims to form the government in Delhi, where the Assembly is in suspended animation since chief minister Arvind Kejriwal resigned after 49 days. Though the BJP has the most seats, it is still short of four.

The buzz in Delhi BJP is former Indian Police Service officer Kiran Bedi is being groomed for the chief ministerial post. "She has a credible face and we are telling the central leaders to push for early elections in the state so we can reap the benefits from the Modi wave," said a leader.

Assam: Owning responsibility for the party's poor showing in the Lok Sabha polls in the State, Assam Chief Minister Tarun Gogoi on Saturday said that he would tender his resignation within a week.

Assam Chief Minister Tarun Gogoi on Saturday said that he would tender his resignation to party president Sonia Gandhi within a week’s time. "We have accepted the people's mandate in favour of the BJP with all humility.

I take full responsibility for the poll debacle in Assam and will tender my resignation.Attributing a bit of "arrogance and complacency" within himself and the Congress for the party's poor show in the the Lok Sabha elections in Assam, Tarun Gogoi today said he would resign within a week as its chief minister.

This is the first debacle since I am here. Probably there was a communication gap with the people. Our campaign was probably not up to the mark. Our publicity did not fulfill our agenda."
Probable Chief minister candidates in Assam: Himanta Biswa Sarma,Sarat Barkatoky.

The Uttarakhand situation appears similar to Bihar, where the Congress-led state government is facing dissent from many legislators. The Congress barely scraped through in the 2012 assembly elections.

The state has 70 seats, of which the Congress has 32 and the BJP has 31 legislators respectively. Three seats are with the Bahujan Samaj Party (BSP) and the rest are with the smaller parties and independents.

The BJP has already demanded resignation of Uttarakhand chief minister Harish Rawat, whose party lost all the five seats in Lok Sabha elections on May 16.

Rawat has given Cabinet ranks to 17 MLAs in the last five days to keep all the Congress factions happy.

Satpal Maharaj had resigned from the party in March to join the BJP. Rawat took almost two months to take action against Amrita. The Uttarakhand Assembly's term ends on March 8, 2017

Maharashtra: BJP set for 'Mission 246 plus' for Maharashtra assembly polls

Close on the heels of an impressive show in the Lok Sabha elections, the Maharashtra unit of the Bharatiya Janata Party (BJP) has announced ''Mission 246 plus'' for the ensuing elections to the state assembly slated for September-October.

BJP-Shiv Sena led three parties alliance titled MahaYuti (grand alliance) has taken a decision to further ride on Modi wave and thereby cash in on the anti incumbency against the 15 year Congress-Nationalist Congress Party government in the state to fulfill its mission on the lines of 272 plus set by the party at the national level.

BJP, which has won 23 Lok Sabha seats, followed by 18 by its over 25 yeard old poll partner and one by Swabhimani Shetkari Sanghatana have already informally met and decided to further step up efforts to further embarass the Congress & NCP which had faced crushing defeat.

Rattled by Samajwadi Party's rout in Lok Sabha polls, Uttar Pradesh chief minister Akhilesh Yadav on Tuesday sacked 36 leaders with the status of minister of state in his government but ruled out his resignation.

Party sources said among those who got the axe were six leaders of minority community, adding Akhilesh might sack some cabinet and state ministers too after the poor performance in the Lok Sabha polls, where the SP managed to get just five seats.

Amid demands for his resignation, Akhilesh, however, indicated that he was in no mood to quit and said reasons behind SP's poor show were being reviewed.