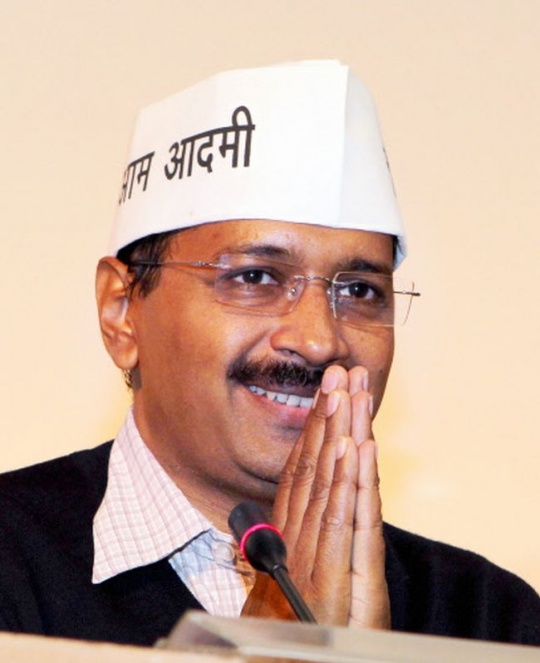 Arvind Kejriwal (born 16 August 1968) is an Indian politician and former civil servant who was the 7th Chief Minister of Delhi from 28 December 2013 to 14 February 2014. He is the National Convener of the Aam Aadmi Party (AAP).

Kejriwal is a Mechanical Engineering graduate of the Indian Institute of Technology Kharagpur and worked for the Indian Revenue Service (IRS) as a Joint Commissioner in the Income Tax Department.

He is better known for his key role in drafting the Jan Lokpal Bill. In 1999 Kejriwal founded Parivartan, an NGO aiming to assist the citizens in electricity, income tax and food ration-related matters. His contributions and role to empower the poorest at the grassroots level and implement the Right to Information Act (RTI) won Kejriwal the Ramon Magsaysay Award in 2006 for Emergent Leadership. He created a corpus fund with the award money and founded the NGO called Public Cause Research Foundation in 2012.

In 2012, Kejriwal launched the Aam Aadmi Party, as he believed that electoral politics was the next logical step in the fight against corruption and defeated Chief Minister Sheila Dikshit in the 2013 Delhi Legislative Assembly election. Following the election, he took office as the Chief Minister of Delhi on 28 December 2013. He resigned 49 days later, on 14 February 2014, stating he did so because of his government's inability to pass his proposed anti-corruption legislation due to a lack of support from other political parties.

2014 Parliament elections
Kejriwal said in January, prior to his resignation as chief minister, that he would not contest a seat in the 2014 Lok Sabha elections. He claimed party members persuaded him to change his mind,  and on 25 March, he agreed to contest against the BJP prime ministerial candidate, Narendra Modi, from Varanasi, but lost the election.