Uttarakhand formerly known as Uttaranchal is a state in the northern part of India. It is often referred to as the Devbhumi (literally: "Land of the Gods") due to many Hindu temples and pilgrimage centres found throughout the state. Uttarakhand is known for its natural beauty of the Himalayas, the Bhabhar and the Terai.

On 9 November 2000, this 27th state of the Republic of India was created from the Himalayan and adjoining northwestern districts of Uttar Pradesh. Find below complete caste demographics of Uttarakhand. Caste plays an important role in Indian politics and elections.

The native people of Uttarakhand are generally called Uttarakhandi and sometimes specifically either Garhwali or Kumaoni depending on their place of origin in either the Garhwal or Kumaonregion. According to the 2011 census of India, Uttarakhand has a population of 10,116,752 comprising 5,154,178 males and 4,962,574 females, with 69.45% of the population living in rural areas. The state is the 20th most populous state of the country having 0.84% of the population on 1.69% of the land. The population density of the state is 189 people per square kilometre having a 2001–2011 decadal growth rate of 19.17%. The gender ratio is 963 females per 1000 males. 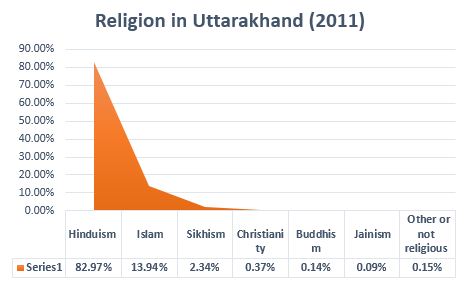