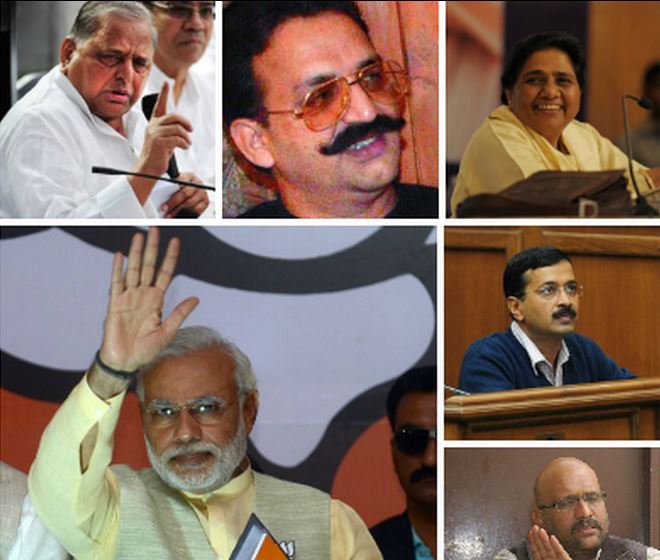 Narendra Modi seems to be the opponent favorite this season

Far from the high-decibel campaigning and 24x7 politicking that are setting the stage for the most interesting contest of the 2014 Lok Sabha election, there are pointers in this temple town that BJP challenger Narendra Modi might not have a cakewalk in the high-profile constituency.

Readying for a "close finish" contest here, the opposition parties are discreetly working on a plan to upstage the Gujarat chief minister. And so, while many missed the fine print behind the sudden withdrawal of Quami Ekta Dal candidate Mukhtar Ansari from the fray last week, there are clear indications of the behind-the-curtains "hulchal" that is pointing at a tacit understanding between political groups to consolidate the opposition votes against Modi. Mukhtar, a 'mafia don' who turned legislator who gave BJP's incumbent MP Murli Manohar Joshi a run for his money in the 2009 poll, is quietly trying through his brother Afzal to "chart a consensus among candidates opposed to Modi to avoid splitting of the 350,000 Muslim votes".

Meanwhile, Aam Aadmi Party (AAP) convener and former Delhi chief minister Arvind Kejriwal is busy burning the midnight oil, striking "small but significant political parleys" with important people in the town. Sources said Kejriwal has "come to Varanasi in a battle mode" and decided to give Modi a fight that the latter "would remember". He has already held secret meetings with Hindu seers at the Tulsighat guest house, adjacent to the fabled Sankat Mochan temple. He has also held discussions with Shaher Qazi Ghulam Yaseen, seeking his community's support at the hustings.

Many leaders are now frequenting the Tilbhandeshwar residence of the Muslim cleric to get his support for the opposition against Modi, who will file his nomination papers from Varanasi April 24. Kejriwal is also trying to strike a chord with the "aam aadmi" through his mohalla sabhas and nukkad meetings. He has since met Dalits and others at Basti Maldahiya. While conceding the dim chances of trouncing Modi, AAP strategists told IANS the party idea is to fight to the finish. If this gives BJP leaders sleepless nights, so be it, chuckles a senior AAP leader.

While Mukhtar's 'electoral sacrifice" by pulling out of the race is not being commented upon by the Congress, the Samajwadi Party (SP), the Bahujan Samaj Party (BSP) and the AAP, insiders say covert operations are on for a common strategy consensus. Meanwhile, the Lok Dal has also pitched in for Zakia Zafri, the widow of former Congress MP from Gujarat Ehsaan who was burnt alive by a mob in the aftermath of the 2002 Godhra riots.

National president of Lok Dal Chowdhary Sunil Singh told IANS he has been impressed by the gusto of Jafri in fighting the legal battle against Modi and her effort to garner poll consensus. "I have written to Sonia Gandhi, Mulayam Singh Yadav and Mayawati, seeking their support for her candidature ... let's see when and how they respond," he said.

Ajay Rai, a sitting Congress legislator who has been fielded against Modi here has pulled out all stops in his campaign and is playing his Bhumihar card pretty well. The caste with a sizable presence in Varanasi, other than the Muslims, can make or mar electoral fortunes. Till now rubbished as an "also ran", BJP campaign managers are no longer ignoring Rai. No wonder Amit Shah, closest aide of Modi, Saturday raked up the criminal antecedents of Rai and alleged he even tried to procure an AK-47 some time back. "Sad that the Congress found no clean candidate against Narendrabhai" Shah told IANS in Lucknow while claiming the Gujarat chief minister faced no threat in Varanasi. "As he files his nomination papers April 24, you will see the wave turn into a tsunami for Modiji" Shah said.

However, both regional satraps -- SP's Mulayam Singh Yadav and BSP's Mayawati -- seem uninterested in giving Modi a tough time. Despite fielding candidates against Modi, they are unlikely to iron out their differences for what many say is a "larger cause". One small but significant victory seems to have come in the way of the opposition camps as the CPI-ML has extended its support to the AAP. CPI-ML state secretary Ramji Rai told IANS that this had been done to "contain communal forces".

Varanasi goes to the polls May 12, in the last phase of the staggered polling schedule.