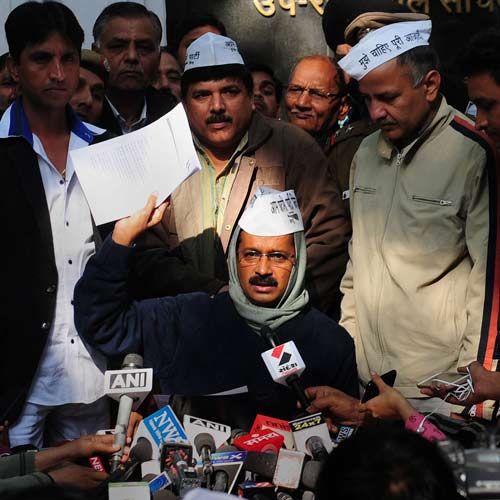 New Delhi: Aam Aadmi Party chief Arvind Kejriwal has finally accepted that resigning as the Chief Minister of Delhi after just 49 days at the helm was a 'mistake'.

In an interview to an English Daily, Kejriwal said that maybe his quitting as the CM of Delhi was “ill-timed” and did not go down well with the common man. He accepted that the mistake was in assuming that the people would 'celebrate' the decision by AAP 'to quit on principle' and believing that people at large would understand on their own as to what their reasons were.

However, he maintained that he had no regrets regarding his resignation and stood by his move to submit the papers on not being able to pass the Jan Lokpal Bill, which was part of the AAP manifesto in the Delhi polls.

But at the same time Kejriwal did say that he should have made efforts to explain to the people the reason behind his resignation, held public meetings and maybe should not have demitted office the same day that the Jan Lokpal Bill “was not allowed to be passed by the Congress and the BJP.”

He was also of the view that the sudden turn of events and the gap in communicating with the people had allowed the Opposition to call his party as escapists and spread certain mis-information about AAP. The Aam Aadmi Party which was formed in 2012 after the Lokpal movement spearheaded by social activist Anna Hazare, had surprised everyone by winning 28 seats in the Delhi Assembly elections in December last year.

Later, they went ahead and formed the government with outside support of eight Congress MLAs. However, though they were initially praised by the masses for reducing tariffs in water and electricity rates, the government lead by Kejriwal took a severe beating when he lead a dharna outside Rail Bhavan just before the Republic Day and when he quit office after 49 days on not being able to pass the Jan Lokpal Bill.

Kejriwal was attacked by the Opposition who said that he had run away from the responsibilities of running the government and also that he had deserted Delhi because he had his eyes on the Lok Sabha polls and wanted to capitalise on the so-called 'wave' for AAP.

AAP is contesting in more than 400 seats in the General Elections and Kejriwal is contesting against BJP's prime ministerial candidate Narendra Modi from Varanasi in Uttar Pradesh. In the same interview Kejriwal also exuded confidence that AAP would definitely win Amethi and Varanasi seat. He also said that the BJP would get less than 180 seats and Modi would never become the next PM of India.

Most of the opinion polls in recent times have predicted that BJP would emerge as the single largest party. They have also shown Modi leading in popularity charts for India's PM as compared to Congress vice president Rahul Gandhi and Kejriwal. Meanwhile, AAP leader Ashutosh said that Kejriwal should have should have asked the public before resigning as Delhi CM. Nonetheless, he added that they were proud of his step.