Former president Mahinda Rajapaksa's attempt to stage a comeback in Sri Lanka's general election has ended in defeat as results today showed the alliance that toppled him making decisive gains.

Mr. Rajapaksa’s UPFA, led by the Sri Lanka Freedom Party, gave a stiff fight and obtained 95 seats, including 12 under the national list. The Tamil National Alliance (TNA)/Ilankai Tamil Arasu Kadchi got 16; Janatha Vimukthi Peramuna (JVP), six; and the Sri Lanka Muslim Congress and the Eelam People’s Democratic Party, one each. The TNA and the JVP were allotted two seats under the national list.

Of the total 22 electoral districts, the UNP secured a majority in 11; UPFA, eight; and the TNA-ITAK combine, three. 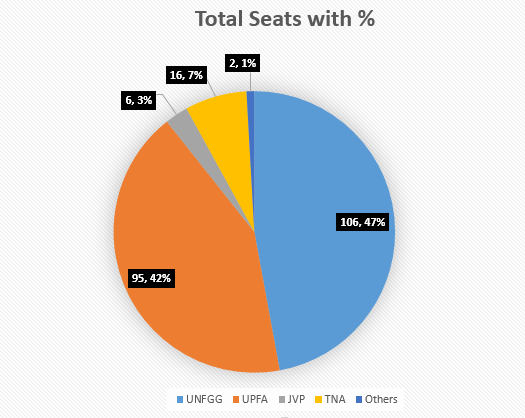 The UNP won 45.7 per cent of the popular vote, ahead of 42.4 per cent for former president Rajapaksa.

Have a look: Rajapaksa received 47.58% of the vote in January’s presidential elections, beaten by former ally Sirisena, who was supported by the then opposition United National Party (UNP). Sirisena is actually a member of the UPFA.