Karunanidhi: He made regional pride his political capital

Karunanidhi: He made regional pride his political capital 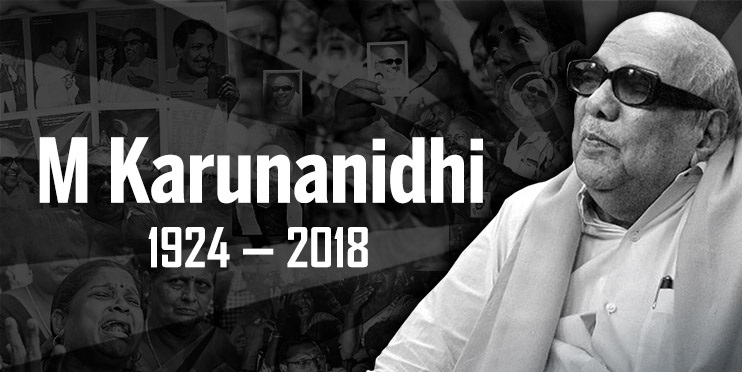 For a man who rarely made his way to Delhi, his presence was always felt in political circles in the national capital. M  Karunanidhi had the ability to sense the popular mood and cobble together alliances that often won both at the Centre and the state.

The wily satrap could ally with the Congress after suffering its Emergency-era excesses. He could sign up with the BJP, a party that seemed to stand for everything the Dravidian movement opposed. He’s been part of the United Front, the BJP-led NDA and the UPA, often wielding power disproportionate to his strength in Parliament. Through it all, he retained a base built on the Dravidian ideals of social reform and welfare, empowerment of backward classes and promoting Tamil identity despite allegations of corruption that never quite went away.

His ability to play regionalism as a card yet negotiate with national parties as an equal served as a template for other parties across the country. In UPA-1, Karunanidhi with his strength of 16 MPs brokered seven ministerial posts and a Rajya Sabha seat for daughter Kanimozhi. In UPA-2, despite a weakened position, he got five ministerial berths on the back of 18 Lok Sabha seats. Even as a DMK minister in the UPA government was seen as the prime suspect in the 2G spectrum scam, the party quit the Centre in 2013 over India’s failure to take a strong stand against Sri Lanka’s handling of the civil war.

Alliances made and unmade in the 1970s illustrate how opportunistic he was: When an embattled Indira Gandhi found the Congress fracturing on her watch in 1969, Karunanidhi was quick to offer his 25 MPs. She then tied up with him when he called polls a year early. The Congress(I)-DMK combine won the 1971 state poll. Within a few years, they were on opposite sides when Indira Gandhi declared the Emergency in 1975. DMK opposed it and many national leaders found a safe haven in TN. A vengeful Indira Gandhi dismissed the DMK government after the Sarkaria Commission accused him of corruption. But less than two years later, sensing an opportunity to oust AIADMK’s MG Ramachandran, he allied with her again. These alliances were also a means to weaken Congress in the state. Wanting to ensure numbers in Lok Sabha, Indira Gandhi agreed not to contest a single state seat and gave in to all his conditions. With that, he effectively kept Congress out of power in the state for half a century.

Despite new parties like MDMK, PMK, DMDK and VCK emerging in TN — many with the intention of countering DMK — Karunanidhi managed to draw them into his fold. He was adept at weakening opponents through electoral tie-ups, promising them much yet denying a share in power. He managed to cultivate a pro-DMK faction in every party, except AIADMK.

Battling AIADMK proved harder than playing Delhi politics. He had to spend 12 years in the opposition until elections were held after MGR's death. The comeback in 1996 was a watershed moment. DMK won in alliance with a Congress faction, led by GK Moopanar and P Chidambaram, and a ringing endorsement from superstar Rajinikanth. Within three years, he dumped TMC to ally with BJP as part of NDA in 1999. Again, DMK MPs, including Murasoli Maran, became ministers with plum portfolios. This was also a period when DMK’s ties with Congress reached its lowest, especially after the Jain Commission that probed Rajiv Gandhi’s assassination suggested that DMK abetted the crime with its support for LTTE. Six years later, however, he’d made peace and in 2004, firmed up an alliance with Sonia Gandhi’s Congress. It’s an alliance that endures.

It remains to be seen if Stalin has imbibed the trade secret — to forge alliances that would propel DMK back into national politics.

SOURCE: THE TIMES OF INDIA