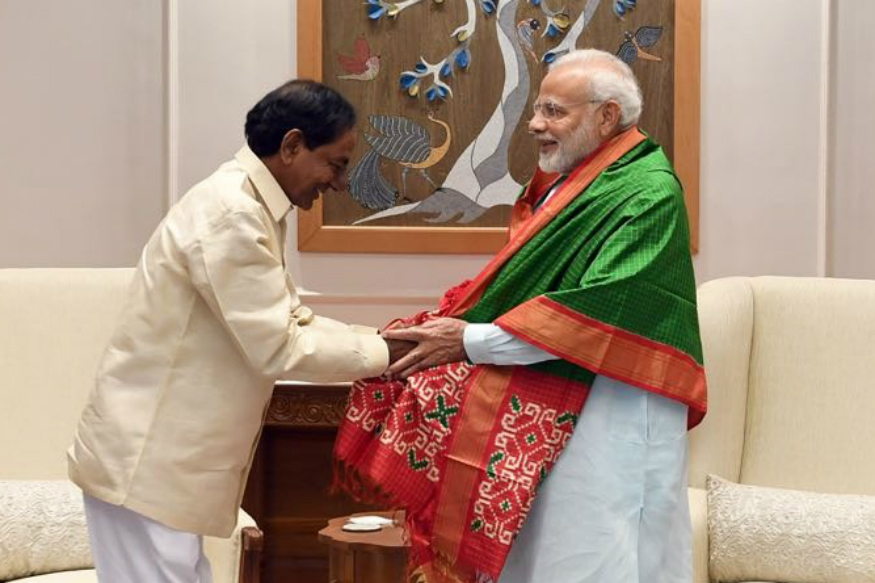 K Chandrashekar Rao does not want the Election Commission to do to him what JM Lyngdoh did to Chandrababu Naidu in 2003 — deprive him of cashing in on recent gains by denying early elections.

For a political leader who went to town with his plans to float a non-BJP, non-Congress front in March, K Chandrashekar Rao has displayed a rather generous bonding with Narendra Modi ever since. Not a surprise then that this bonhomie has raised eyebrows.

On Saturday, the two met for the third time in two months, the meeting being the second one in August. In addition, Modi had given time to KCR's son and Telangana IT minister KT Rama Rao as well.

The latest meeting comes on the back of KCR's talk within party circles of the possibility of advancing the Telangana Assembly elections to the winter of 2018. Sources suggest that KCR could dissolve the Assembly in September and would like the Election Commission to hold elections along with those in Rajasthan, Madhya Pradesh and Chhattisgarh.


But KCR does not want the EC to do to him what JM Lyngdoh did to Chandrababu Naidu in 2003. The then Chief Election Commissioner did not let the Andhra Pradesh CM enjoy the luxury of immediate elections to take advantage of the sympathy wave after the assassination attempt on Naidu by Naxals in October 2003. The polls were held on schedule in April, 2004.


Which is why a senior advisor to KCR also went to the Election Commission this week. The Telangana CM wants to be sure about the timing of the elections before deciding to dissolve the House.

Why would KCR want to curtail the term of the Assembly, especially when all surveys commissioned by him reportedly predict a tally of 100 out of 119 seats for the Telangana Rashtra Samiti? Either the surveys are a sham, designed to demoralise his opponents or KCR is apprehensive that closer to the summer of 2019, he may not be able to hit a century.

For the record, riding on the sentiment that he had delivered Telangana and a divided opposition, the TRS had won 63 of the 119 seats in the Telangana Assembly in 2014.

The reasons are several. The Congress is no way near battle-ready if elections were to be held in December. It is a divided house with several CM aspirants while the TRS is ready with its candidates, funds and vehicles. Moreover, in the past few days, KCR has gone into poll mode, announcing sops for just about every community — from temple priests to government employees to women self-help groups.

KCR is on a high given the good monsoon Telangana has received. The Rythu Bandhu scheme under which he has given Rs 8,000 in two instalments to 58 lakh farmers, has created a positive impression for him politically.

The apprehension however, is that all this would be a distant memory by next year and if elections are held in April as scheduled, voters will be vexed with water shortage, both for drinking and irrigation.

The TRS worry also is that should elections to Telangana Assembly be held alongside Lok Sabha polls as they have been held in united Andhra Pradesh since 1999, the Congress projection of Rahul Gandhi as the PM face could affect it adversely. Since the BJP is not a potent force in Telangana, KCR does not want to risk people voting for the Congress in both EVMs.

The calculation also is that the Congress is poised to do well in the three Hindi-speaking states and, therefore, will go into 2019 with a spring in its step. Telangana shares its border with Chhattisgarh and would not want the sentiment to affect its voters in any way.

But why would Modi agree to help KCR hold early elections? With everyone keenly watching the Modi-KCR equation, the PM knows the Congress would dub the BJP as the ‘B team’ of the TRS. Would the Modi-Amit Shah combine want that tag in a crucial south Indian state?

Secondly, if elections are held along with the three north Indian states, Telangana for geographical reasons will be seen as an indicator of the mood in the Peninsula. With the BJP not poised to do well, it will be interpreted as a rejection of the party in south India.

Three, agreeing to KCR's proposal would go against Modi's avowed idea of one nation, one poll. If the intention was to save on poll costs, Telangana would be voting twice within a span of four months — for the Assembly in December and for the Lok Sabha in April.

But then Modi also has to look ahead to a post-2019 situation. The BJP could need the TRS support in case it falls short of the 272-mark and KCR will be keen to play a key role at the Centre with ministerial berths for his MPs. The flip side is that Modi is aware of how KCR led the Congress up the garden path, reportedly promising to merge the TRS with it if Telangana was granted, only to go back on his word.

On paper, the PM-CM meeting is only about official business. But it is the surround sound in Hyderabad that the TRS has created over the possibility of advancing elections that has given it a political hue.