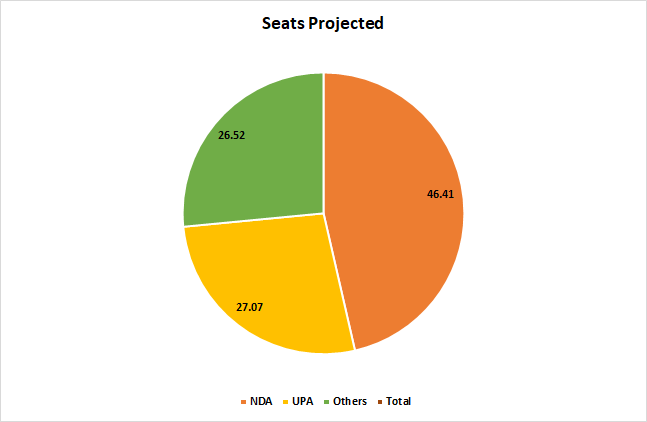 The BJP-led National Democratic Alliance at the Centre may fall 20 seats short of the magic mark of 272 in the 543-seat Lok Sabha, if elections were held today, says the opinion poll. According to the survey, conducted between 14th January and 25th January 2019, the NDA may win 252 seats, the Congress-led UPA - 147, Others - 144.  A total of 15,731 of voters were surveyed.

Uttar Pradesh (80/80): The Times Now-VMR survey shows the NDA is in for a jolt in the country's most crucial state of Uttar Pradesh. The NDA tally is likely to slump to just 27 out of the total 80 seats, compared to 73 seats it won in the 2014 Lok Sabha elections. The BJP's vote share is likely to be down by 4.4 per cent. The SP-BSP alliance is expected to reap benefits for the opposition and the alliance could bag as many as 51 seats, compared to the just five seats it won in 2014. Congress will stay flat with expected wins in two seats.

West Bengal (42/42): Mamata Banerjee-led All India Trinamool Congress is likely to win the maximum number of seats (32) in West Bengal. The BJP, however, is likely to make a jump from 2 seats in 2014 to 9 in 2019. The Congress, however, is expected to win just one seat, while Left Front is not likely to win even one seat. The TMC had won 34 of the total 42 seats in 2014 Lok Sabha Elections. The Congress had bagged four, the BJP 2 and the Left Front two.

Tamil Nadu (39/39): As far as seat share projections are concerned, Congress-led United Progressive Alliance (UPA) is expected to make huge gains and win 35 out of 39 seats. While the All India Anna Dravida Munnetra Kazhagam is likely to win four seats, BJP-led National Democratic Alliance (NDA) is unlikely to open its account. In the 2014 Lok Sabha Elections, the Congress and its allies had failed to win even a single seat, while the AIADMK won 37 of the total 39 seats. The BJP+ and Others had won one each.

Madhya Pradesh (29/29): Albeit with four seats less than 2014, the BJP is likely to win the maximum number of seats in Madhya Pradesh in 2019 Lok Sabha Elections. Congress seems to be failing in capitalising on gains in Assembly Elections in the state. As per the survey, the BJP is likely to win 23 seats and Congress - 6. In the 2014 Lok Sabha elections, the BJP led the tally with 27 seats while the Congress had won just two out of the total 29 seats.

Rajasthan (25/25): Rajasthan losses could halt the BJP’s march to a majority as the NDA loses 8 seats and comes down to 17 in the state, as per the Times Now-VMR survey. The Congress is expected to grab the remaining 8 seats. The BJP had done a clean sweep in Rajasthan in the 2014 Lok Sabha elections, winning all 25 seats.

Andhra Pradesh (25/25): YSR Congress Party chief Jagan Mohan Reddy may end up as the kingmaker as the YSRCP is expected to bag 23 seats. While the Telugu Desam Party is expected to win only 2 seats, the BJP and Congress are not likely to open their accounts. In 2014, it was the ruling TDP that had bagged maximum seats (15). The YSR Congress Party had won eight while the BJP had bagged two out of the total 25.

Assam (14/14): It seems the Citizenship Bill is consolidating votes for the BJP. The survey reveals that the BJP is likely to win eight seats, one more than it won in 2014 Lok Sabha Elections. Congress is likely to retain three seats, All India United Democratic Front - 2, Others -1.

North East (11/11): The BJP retains supremacy in the North East with 9 seats while the UPA only manages 1 seat.