If you had any doubts about the vast numbers of online media warriors employed by our netas for the Lok Sabha Elections, you should definitely read this to dispel them. The editors at TIME magazine must be wondering the same, after their annual online poll for its readers to determine the 100 most influential people in the world has turned into an Arvind Kejriwal vs Narendra Modi contest. 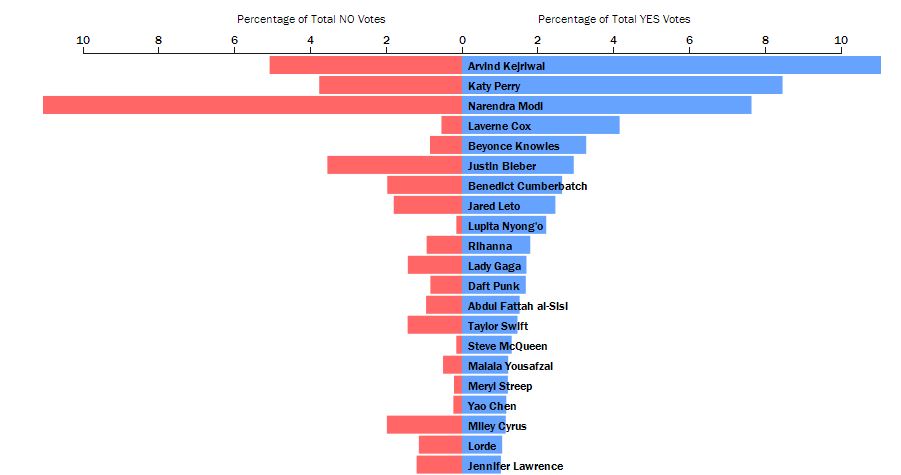 The funny part is, the final 100 is determined by the editors themselves, although the results of the online poll are ofcourse published. But the hired interns/supporters/workers have made sure that the true effect of India’s billion plus population is felt globally. For the TIME 100 Poll, The magazine has asked readers to vote in many categories for the people they think have changed the world this past year, for better or worse. The various categories include World, U.S. Politics, Business & Tech, Culture & Fashion, Movies & TV, Music, Media and Sports. But the operative terms are 'for better or worse'. So whoever emerges the winner, may not be the most popular, she may very well be the most hated. 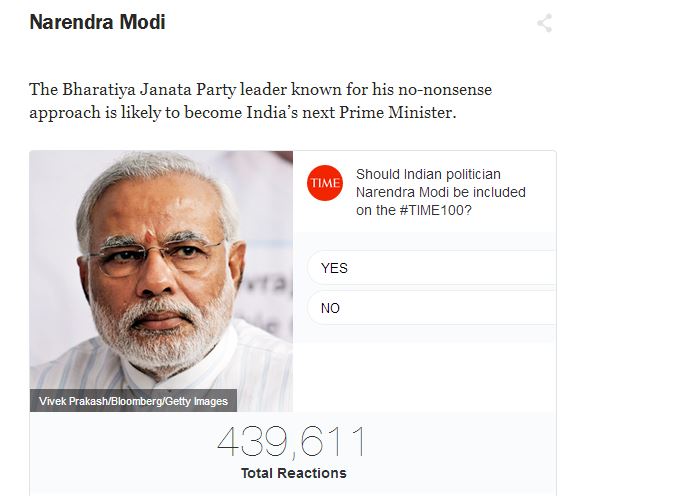 So how are the TIME poll results turning out? In the World category, apparently the most popular leader in the whole world is Arvind Kejriwal, who has over shot the 1 to 10 scale in the YES votes department. Likewise, Narendra Modi has emerged as the most unpopular one, with the maximum NO votes. Rahul Gandhi is also there, barely (clocking in more negative votes that YESs)

The figures and data are bound to change as the day progresses (we are attaching the last update we could capture before publishing; it is changing very very quickly. The numbers are dropping faster than that of a slot machine infact). The trend this year is not different from that of past years. Modi topped the 2012 list with most number of 'no way' votes In 2013 Time 100 poll, Modi drew a total of 5.23 lakh votes , though more than half were negative. Whereas Kejriwal made it to the editor’s final list of 100 influential people. 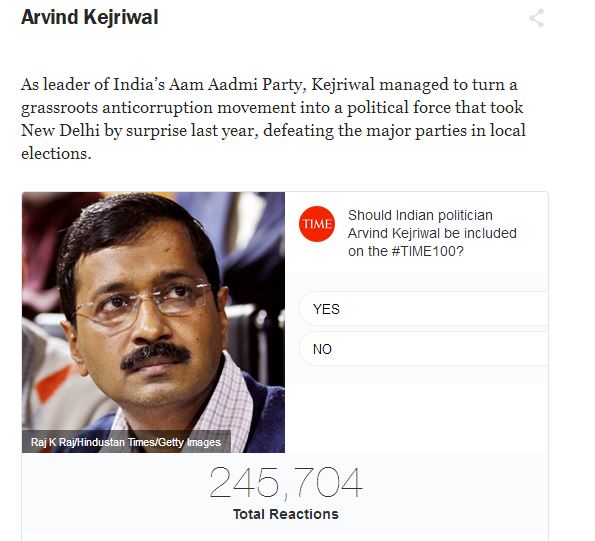 Before Modi’s online supporters/paid workers start thrashing us in the comments section, let us clarify that these are just numbers we are furnishing. Just to re-establish the fact that online media is being manipulated daily to influence voter perception in the ongoing Lok Sabha elections.

These results really don’t much of a difference, the winner will not actually end up becoming our country’s PM. But it does show, that a war is being fought online, for influence, for leverage, for popularity and the general public is being made to believe that there one retweet, one share, one online vote will change the course of Indian politics.

Online discussion do matter, it shows one is aware, informed and opinionated. But the thing that counts is the real vote. We sincerely hope that the convenience of voting by the click of a mouse is replaced by people stepping out and casting their vote this time around. Because it is the one that matters. In the meantime, do feel the pain of pop singer Katy Perry, who is caught between Kejriwal and Modi on the poll. Strangely she is trying to catch up Kejriwal in the Yes votes and Modi in the No votes. Hope she is not crying over this during her million dollar earning music tour.

So all the fervent Modi and Kejriwal supporters out there. You all may be rushing to the site to cast your vote in your leaders' favour before the deadline (watch out TIME, your site may very well crash), but please do not believe the results are fair and influential enough to make some real change. Please do go out to vote though. In the real world. Please.