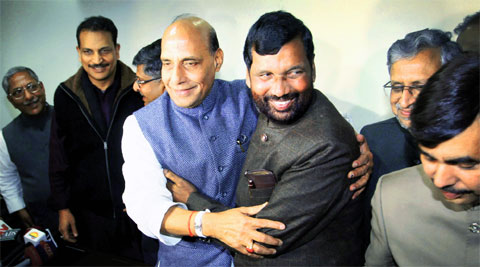 The BJP-led National Democratic Alliance got a shot in the arm Thursday as Ram Vilas Paswan’s Lok Janashakti Party returned to the grouping after more than a decade, becoming the BJP’s first new ally ahead of the Lok Sabha polls.

Under the deal between the two parties, the LJP has got seven seats to contest in Bihar in the general elections.

The decision came at the end of a week-long political drama that saw the Congress high command holding hectic, last-minute parleys with Paswan to stop him from joining the NDA.

The former union minister made the announcement with BJP president Rajnath Singh by his side at Singh’s residence and pledged his support to the BJP’s prime ministerial candidate Narendra Modi. Paswan’s son Chirag and other LJP leaders were also present.

Paswan had quit as minister in Atal Bihari Vajpayee’s NDA government in protest against the 2002 Gujarat riots. On Wednesday, he ended his 10-year-old partnership with Lalu Yadav’s Rashtriya Janata Dal with much bitterness.

“As far as Modiji is concerned, LJP is now a part of NDA and NDA has already declared Modi as its PM candidate,” Paswan said. “The next government will be an NDA government.”

Modi, it is learnt, spoke to Paswan over the phone Thursday evening and congratulated him on his return to the NDA. Paswan will share the stage with Modi at the BJP rally in Bihar’s Muzaffarpur on March 3. The BJP is projecting its alliance with the LJP and Koeri community leader Upendra Kushawaha’s RLSP as the “new NDA in Bihar”.

With LJP members and senior BJP leader Rajiv Pratap Rudy by his side, Rajnath Singh said Paswan would meet BJP patriarch L K Advani and Modi in the next few days.

“I have complete faith that this alliance between the BJP and the LJP will benefit NDA not only in Bihar but also in other states in the country,” Singh told reporters. It is learnt that Paswan has been asked to campaign for the NDA outside Bihar as well. According to 'indianexpress'

In 2002, when Paswan moved out of the BJP led alliance, he was a different man. He had resigned from the Atal Bihari Vajpayee government and had helped the Congress in stitching the United Progressive Alliance (UPA) with RJD Chief Lalu Yadav.

But having lost the last two elections in the state, his party was also decimated in the Lok Sabha polls in 2009 when RJD-LJP alliance left Congress in a lurch to fight alone in Bihar. While, this time too, he was initially willing to strike a deal with RJD and Congress, he was being offered not more than 5 out of 40 seats in Bihar.

"Though there was tension between the LJP and RJD, we always maintained our support for RJD," Paswan said.

The LJP will now contest from 7 seats in Bihar and 3 seats are being left for another backward Koeri leader Upendra Kushwaha.

The announcement on Thursday was a low key affair. Despite being in Delhi, Modi stayed away from the flashes as the announcement was being made. Paswan will meet party patriarch LK Advani and Modi in the next few days. The LJP supremo will also share the dais with Modi at the latter's rally on March 3 in Muzaffarpur in Bihar. Source - 'ibnlive'