In the third phase of the Bihar assembly elections, 215 out of the 808 candidates contesting have declared pending criminal cases against them. 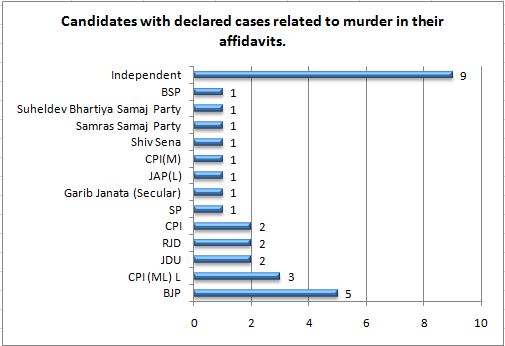 Anant Kumar Singh, an Independent candidate from Mokama constituency and Rajeev Ranjan Singh of the Samras Samaj Party from Digha constituency have each declared 6 charges related to attempt to murder in their respective affidavits.

Pradeep Kumar, a candidate fielded by the BSP from Dumraon constituency, and Lalan Singh, JAP(L) candidate from Mokama constituency, have each declared 5 charges related to attempt to murder against themselves.

Candidates with cases related to crimes against women: 12 candidates have declared cases related to crimes against women. 1 candidate fielded by BSP, 1 by JAP(L), 1 by Garib Janata Dal (Secular), 1 candiate of Lokpriya Samaj Party and 1 candidate of Bahujan Mukti Party have each declared offence related to assault or criminal force to woman with intent to outrage her modesty (IPC Section-354). 1 candiate of Aarakshan Virodhi party, 1 fielded by CPI, 1 candiate of Rashtriya Jankranti Party, 1 of SHS and 1 Independent candidate have each declared charge related to Husband or relative of husband of a woman subjecting her to cruelty (IPC Section-498A). 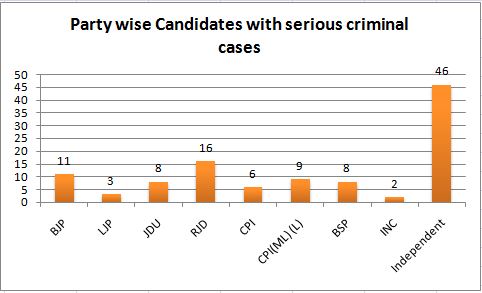 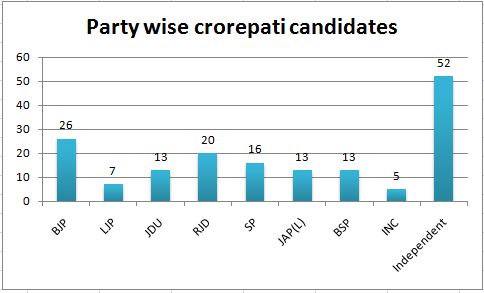 There is a possibility that Bihar may get 50 Muslim MLAs in the ensuing assembly elections. This could be candidates having Muslim identity, irrespective of the political affiliations.
There are 24 assembly segments where Muslims have upper hand in Bihar. These are in the Seemanchal region, bordering Bangladesh and Nepal.

Muslims have a decisive role to play in each of the six assembly segments of Kishanganj, Katihar, Araria and Purnia districts of Bihar.

Kishanganj has 78 per cent Muslim population, Katihar 43, Araria 41 and Purnia 37 percent. So, it is certain that 24 Muslim candidates may emerge victories from Seemanchal region.

Besides, there are three other districts where Muslims are in a sizable percentage in Bihar. In Darbhanga Muslims are 23 per cent, in Sitamarhi 21 percent and in West Champran 21 percent.
Muslim candidates can turn the table in their favor in most of these constituencies if they align with likeminded caste based parties.

So if we add these 18 assembly segments with 24 Seemanchal seats, Muslims can pocket 42 MLAS from these seven districts alone.

In eastern Champran Muslims are 19 per cent, Bhagalpur 19 percent, Madhubani 19 per cent and Siwan 18 per cent.

There is possibility of a Muslim candidate winning a few seats from these 24 assembly segments. This can happen increasing the net of the likeminded caste based parties.

An assessment of the voting pattern for 81 seats that went to polls in the first two phases has made the BJP rework its strategy for the remaining three phases of the Bihar assembly elections. Instead of wooing the Yadavs, who appear to be mostly rallying behind the Grand Alliance (GA), the BJP is now focussing on leaders of Dalit groups and the scattered vote bank of the extremely backward castes (EBCs) in its ranks and among its allies. The campaigns will also see a touch of women power now.

The Dalits and EBCs – often called the silent voters – account for almost 50% of the voters in Bihar, and they can tip the scale in the remaining 162 seats where the stakes are high for both the BJP-led NDA and GA.

In the first two phases, women outnumbered men to record an average 58.5% turnout. Women, who are 47% of the total electorate, are believed to have voted for improved law and order during the Nitish Kumar regime, eight years of which were in alliance with the BJP.

“Our party is convinced that Yadavs are solidly behind GA and so there is no point wasting time on them,” said a senior party leader, seeking anonymity. The NDA, though, has more than 20 Yadav candidates (out of 28 it has fielded) to fall back upon in the remaining three phases on October 28, November 1 and 5.

Besides, to woo women voters, the BJP has decided to increase the campaign frequency of leaders such as Sushma Swaraj and Smriti Irani and also plans to rope in Rajasthan CM Vasundhara Raje Scindia for the remaining phases.

Meanwhile, both groups claim to have secured an edge in the last two phases of voting. “The NDA has a lead of 50-55 seats at the end of the second round. I thank the women who voted against increasing crime, incidents of rape, Lalu’s jungle raj and Nitish Kumar’s drive to open liquor shops in every by-lane,” said former deputy CM and senior BJP leader Sushil Kumar Modi.

“We are going to get at least 22 out of the 32 seats in the second phase,” said BJP national spokesperson Shahnawaz Hussain.

The GA is equally buoyant, particularly after BJP’s assessment suggesting GA was ahead on the 49 seats of first phase. “At least 65 (of 81) seats is sure. Our assessment is based on the turnout of the poor, Dalits, minorities and women. It’s a vote against the false promises made by Prime Minister Narendra Modi,” said Pragati Mehta, RJD spokesperson.