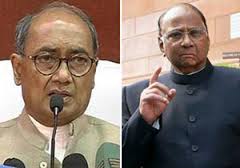 Sanjay Sinh, whose candidature has sparked of protests in Assam, Congress' T Subbrami Reddy and K V P Ramachandra Rao and TRS candidate Keshav Rao (all in Andhra Pradesh) and Trinamool candidate actor Mithun Chakraborty (West Bengal) are among those left in the fray.

Union minister Pawar, who decided to keep away from Lok Sabha elections, and Deora were among the seven candidates elected from Maharashtra.

In Rajasthan, BJP nominee Goel, who is Delhi unit chief, Ram Narain Dudi and Narain Pachariya were the successful canididates .

In Tamil Nadu, the ruling AIADMK bagged four seats while DMK and CPI-M got one each.

While Rangarajan has been re-elected, Siva had been a member of the Upper House in the past.

Congress general secretary Digvijay Singh, who ended his 10-year self-proclaimed exile from electoral politics after losing in Madhya Pradesh as Chief Minister, along with BJP vice-president Prabhat Jha and party leader Satya Narayan Jatiya were elected from the state.