BJP is getting lower than the majority, if Election Held today: survey

BJP is getting lower than the majority, if Election Held today: survey

If the elections were held today, the Bhartiya Janata Party (BJP) coming to power in 2014,
the magic number will be reduced, shows India Today-Karvy Insights Mood of the Nation
MOTN) survey.

The MOTN survey, released on Saturday, August 18, presents Prime Minister Narendra Modi
as the most favorable Prime Ministerial candidate, in which 49 percent of the voting for the
current leader is against Rahul Gandhi, which is supported by 27 percent of respondents.

However, Congress-led UPA has made substantial profits in the case of vote share, although
this seat is moving forward in the stock.

In scenario 1, the allies under both the coalitions remain the same as they were in 2014, without any new equations coming into play. 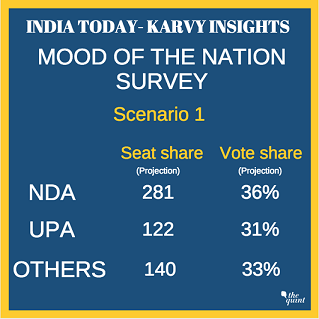 As far as vote share is concerned, the UPA is pegged at 31 percent, while the NDA is at 36 percent and the others at 33 percent.

Playing big on its pre-poll alliance under this scenario, the UPA is predicted to do much better, garnering close to 224 seats, trailing behind the NDA by hardly four seats. Others get 91 seats.

As far as vote share is concerned, the UPA is at 41 percent, far ahead of the NDA which is at 36 percent, while others are expected to get 23 percent.

The survey pegs the reason behind the UPA alliance getting lesser seats despite a far higher vote share to the fact that the BJP vote base is concentrated at specific regions like the north, west and the north-west.

Scenario 3: NDA and its Southern Allies

In this scenario, the NDA placates its new alliance partners in the south - AIADMK in Tamil Nadu and the YSR Congress in Andhra Pradesh. 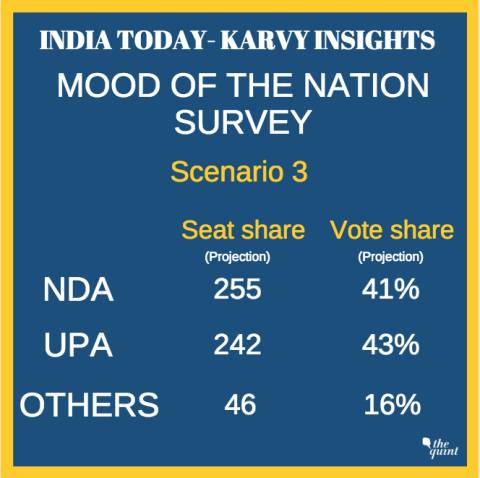 With those allies in tow, the NDA+ is likely to garner 255 seats, while the UPA is expected to get 242 seats.

However, if TRS and BJD join the NDA in a post-poll alliance, the number could spike up to 282 seats, delivering a massive blow to the UPA.

In all scenarios, the NDA alliance is ahead of the UPA as far as seat share is concerned.

The survey further predicts that to up its chances in the final contest, the Congress will have to win in two of three upcoming state elections - Madhya Pradesh, Rajasthan and Chhattisgarh.

Choosing An Alternative to Narendra Modi

Among the Opposition leaders, Congress president Rahul Gandhi was backed by a stellar 46% of respondents, followed by TMC supremo Mamata Banerjee who was received positively by 8% people as an alternative to Modi. Six percent of those part of the survey said that former finance minister P Chidambaram and Rahul's sister Priyanka could also be a good challenger to Modi. 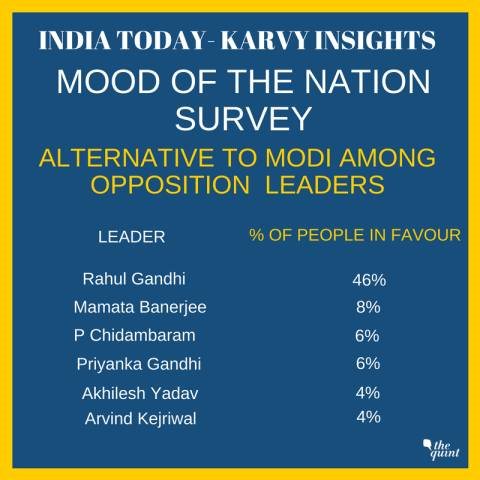