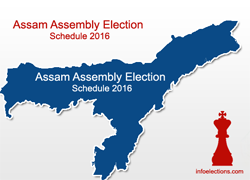 The Election Commission declared the dates in the first week of March along with the poll schedule of the four other states headed for Assembly polls this summer — Kerala, Tamil Nadu, Pondicherry Assam  and west bengal.

Assam Assembly Election has been announced to be taking place in 2 phases. In First Phase which is on 4th April -  65 Constituencies are going to polls and Second phase on 11th April - 61 Constituencies will go to polls.

Assam Vidhan Sabha State Election Dates Phase has been updated.Last Year all 140 ACs went to polls on same day. But this time the elections are in two phases. Voting Election Result Date 2016. Following is the Schedule for Assam Assembly election 2016. Click here to read more on Election Schedule News.