Washington (CNN)Donald Trump has hit a new milestone in national polling, garnering 41% of the Republican vote in a new national poll. 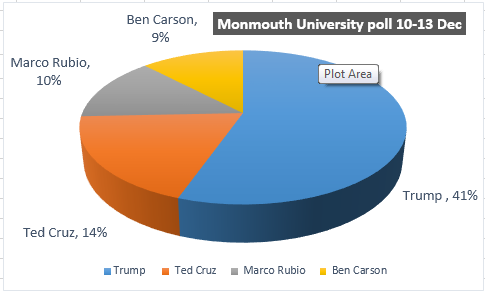 In second was the rising Texas Sen. Ted Cruz, at 14%; followed by Republican Sen. Marco Rubio, at 10%. Ben Carson was at 9%, down 9 points from October, and all other candidates were in the low single digits.Trump is at 41% in a Monmouth University poll out Monday, holding a wide advantage over his GOP challengers. His support was up from 28% in October.

Cruz and Rubio both were up 4 points since October’s poll, a shift within the poll’s margin of sampling error.

The candidates are heading into their next Republican debate on Tuesday in Las Vegas, hosted by CNN.
Trump has led in nearly every national poll for months, though his solid lead in the key early state of Iowa is being threatened by Cruz — who recently topped Trump in an Iowa poll out this weekend.

Monmouth surveyed 385 Republican and Republican-leaning voters by telephone from December 10-13 for the poll, which has a margin of error of plus or minus 5 percentage points.

How to win an election