A flurry of polls released in the last few days have pointed in sometimes conflicting directions as the first debate since the terror attacks in Paris and the shooting in San Bernardino approaches, but the Poll of Polls points to clear story lines emerging nationally and in the two states set to cast the first ballots of the 2016 presidential campaign.

According to the CNN Poll of Polls averaging the six most recent live-interviewer telephone polls, the race in Iowa is a tight one between Cruz (27%) and Trump (25%). Rubio and Carson follow here as well, with 13% and 12% respectively, while Bush (5%) and Paul (4%) lag behind, trailed by four candidates at 2% each: Christie, Fiorina, Huckabee and Kasich. 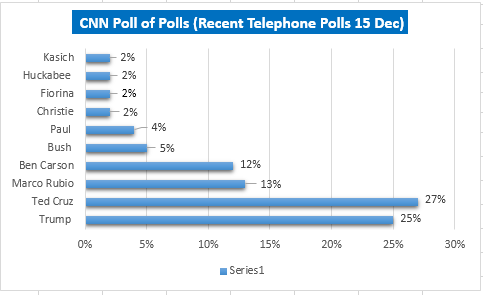 Trump’s lead in these national polls varies from 27 points in the most recent poll from Monmouth University to just five points in the NBC News/Wall Street Journal survey conducted early last week. Some of that difference stems from sampling — the CNN/ORC Poll and the Monmouth poll measure opinions among registered voters who say they are Republicans or lean toward the Republican Party, and both found Trump with larger leads than some polls using a different sampling method.

The NBC/Wall Street Journal, CBS News/New York Times and Suffolk University/USA Today polls all interview those who say they plan to vote in their state’s Republican primary or caucus.

There is also timing, with the Monmouth poll the only one conducted entirely after Trump released his proposal calling for a ban on allowing Muslims to enter the United States.

Still, each of the five polls included in the national CNN Poll of Polls shows Trump holding a lead larger than its margin of sampling error.

While the national polling shows significant volatility, the Iowa poll results show even greater variation from poll to poll.

Three of the six Iowa polls included here found Cruz with a significant lead over Trump, two found the two within margin of error of each other, and one found Trump ahead by a wide margin. The CNN/ORC poll which found Trump ahead is the oldest in the bunch, with interviews conducted between November 28 and December 6.

Surveying likely Iowa caucusgoers is one of the toughest challenges in election polling, as it is routinely one of the lowest turnout events in the entire presidential election process. In 2012 and 2008, only about 6% of the state’s registered voters participated in the Republican caucuses, and whether turnout this time around will be similar is a question that can’t be answered until the caucuses themselves are complete.

Some argue that Trump’s appeal among those who are not regular participants in the caucus process will drive turnout higher, much as the hotly contested presidential race on the Democratic side in 2008 did for that party. Others say Trump’s supporters’ allegiances aren’t strong enough to overcome the challenges inherent in participating in a caucus: Having to trudge out on a wintry night for several hours of political speeches and declare your support for your chosen candidate publicly.

In New Hampshire, a larger turnout means the task is somewhat easier, and the most recent polls are more closely aligned with each other. Five polls were included in the CNN Poll of Polls in New Hampshire, with the earliest including interviews conducted November 14 and the latest running through December 8.

The CNN Poll of Polls in New Hampshire finds Trump (26%) with a more than 2-to-1 advantage over his nearest competitor, Rubio, who at 12% is the only other candidate to average double-digits. Behind Rubio, a passel of candidates range in support from 7% to 9% — Carson and Cruz each average 9%, Bush 8% and Kasich and Christie 7%.

That bunch-up around third place masks some clear trends that have developed in recent New Hampshire polling, Christie’s numbers are on the rise, with the governor averaging 11% in the two polls conducted after Thanksgiving compared with 5% in the three conducted earlier in November.
Carson, meanwhile, has been losing steam, dropping from 11% in the pre-Thanksgiving polls to 6% in the polling conducted more recently. Bush, Rubio and Cruz have been roughly steady in the Granite State lately.

How to win an election